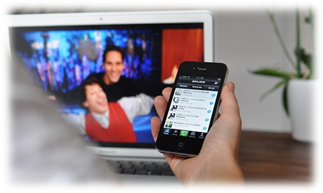 Have you ever watched a show live and tweeted about it at the same time? Or perhaps you saw a super bowl commercial and interacted online with a brand because of its hashtag. The invention of social media has changed the way consumers watch TV. You are no longer alone watching the television set anymore, it is now you, the TV set, and millions of other people using social sites such as Facebook and Twitter.  Social television, also known as the “second screen,” is the social interaction between TV programs, content, and those using the social sites while watching their favorite programs.  Now there are more people watching TV than ever because the conversations being held online are causing awareness of other TV programming.
The social television phenomenon essentially provides marketers and brands with a large live focus group to provide immediate feedback. By paying attention to the conversation happening online, television producers are able to tailor content to provide programming that reflects the attitudes and interests of their viewers. Many television programs are starting the conversation by creating hashtags and displaying them while the show is airing in order to get people talking and make it easier to connect with other fans.
Increasingly, the groups working to promote television programming are engaging social audiences, for a number of reasons including: One of the goals for any marketer is to increase awareness of their brand.  Social TV is a medium that marketers use to help achieve that goal because it is able to reach so many people at once.  When marketers realized that people are discussing TV shows or even commercials over social networks such as Twitter and Facebook, marketers began to capitalize on the opportunity. It is hard to find a TV show that does not have a hashtag that appears periodically on the television screen.  It is almost a necessity at this point for marketers, especially those working with live programming such as award ceremonies, American Idol, The Voice, etc.
Making a hashtag with a brand’s name and something related to what is happening on the program is the easiest way marketers increase their brand awareness.  The HBO series Game of Thrones has a #GoT army of 1.79 million followers (Mashable).  One example of how the series (and many other television series) connect what is happening in the program with their brand is by using a hashtag such as #GoTFinale.  Many of their followers are going to want to post something about what happens in the finale and they will want others to see it and possibly respond.  Using the #GoTFinale increases awareness for Game of Thrones tremendously and peaks the interest of those who do not watch the show. Social listening is basically when a marketer reads and analyzes posts and pictures in order to understand the conversation on the social network.  Most marketers will not and should not jump into a conversation without listening to their potential customers first. Social TV is one of the best mediums to listen to conversations about an event, show, or product because so many people are posting their opinions on social networks and it is easy to find those opinions via hashtags.  For instance, social listening would be important for disaster relief organizations, because they would be able to help pin point people that are in distress at a faster pace.

3.To Start conversations with Targeted audiences What Is Social Television?
http://www.whatissocialtelevision.com/
What are the Advantages of Social TV?
http://www.whatissocialtelevision.com/Advantages-of-Social-Television.html
Why TV Is Going Social
http://www.forbes.com/sites/dorieclark/2012/09/06/why-tv-is-going-social/
Social TV Keeps Viewers Engaged When Minds Might Wander, Study Says
http://adage.com/article/media/social-tv-viewers-engaged/235739/
Social TV Is Here to Stay: Do You Tweet While You Watch?
http://mashable.com/2014/09/02/social-tv-brandspeak/