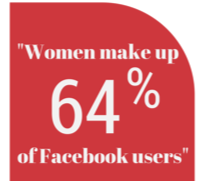 Have you ever wondered how men and women use social media differently? With social networking platforms having over a billion users it could be difficult to determine how different genders are using it. However, there are a few common uses that have been identified. Women and men communicate differently than each other, women tend to share their social media information to build relationships with others and hope to connect with others who had the same experience and conflicts. Unlike women, men enjoy using social networking for professional reasons and also to browse around for their interests.

How Do Women use Social Networking Platforms?

Women are dominating many of the biggest social networking sites. According to Pew Research Internet Project, out of all the social networking users women tend to use sites like facebook, Pinterest, Tumblr, and Instagram much more often than men. According to the article “More women on Facebook, Twitter and Pinterest than men mentioned” women make up 64 percent of Facebook users, 58 percent of Twitter users and a whopping 82 percent of Pinterest users.”(Marketing Firm Digital Flash NY).Women use online networking to make connections and share information about their personal lives and women are interested to learn more about real people experiencing similar conflicts. When it comes to communication, women are more careful about their online reputations and hold back on putting a lot of their information out. Another thing that separates women and men while using social media is that women are more likely to limit what strangers can see online.

How do Men use Social Networking Platforms?

Men tend to use more professional social networking sites such as LinkedIn. According to Lorrie Thomas, a professor of Social Media Marketing at UC Berkeley, stated, “Men use social media as an “interactive Rolodex,” storing contact information for future use”(Thomas). Men use social media to update their status and gather different kinds of information, rather than wanting to learn about somebody else’s personal life and experiences. However, men enjoy browsing sites like Digg, YouTube, and LinkedIn. Men love to compete with others! For example, men like to share what kind of car they have and they feel the need to be better than others on their Facebook. Unlike women, men are more likely to post freely on social networking sites.