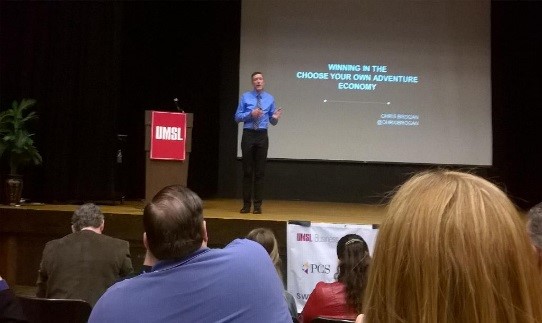 By: Amy Cabanas
I attended the #UMSL Digital Marketing Media Conference 2015 at The University of Missouri St Louis on April 17th hosted by Professor Perry Drake. Professor Drake sure handled it and then some. When I arrived I was graciously greeted by well-informed volunteers that were able to lead me to my small swag bag and my agenda. I spent a little time walking through speaking to various companies, including people from CIC until it was time to head into my first break out session.
I choose “Marketing Yourself for That Ideal First Job” with Betsy Mack of Technology Partners. It was from 10:00am – 10:50am. I arrived at 9:30ish so my timing was perfect. As a motivated younger professional I felt this would give me an opportunity to learn more ideas on how to market myself better, and learn more about social media.

Betsy began with introduction, then jumped right in with discussing how it is important to remember to always be open so that you create strong partnerships which you develop over time. Also by doing this you create your own personal brand with many different aspects and let them evolve as you do. Also, that I should remember that I am an extension of my brand in which I want to represent for when I land my first ideal job.
Speaking of landing that job, she also helped with some etiquette. The follow up is always key on social media sites like LinkedIn. Be authentic and don’t post inappropriate content. Package yourself fully. Betsy also mentioned to not have two version of you, so be real. Networking is key and the need to be uncomfortable means to be successful as well. Go at it alone or with one person. Always follow up and even think about a handwritten letter. Betsy also said to never forget you elevator pitch and I would have never thought to be ready at any time as an important aspect of networking. She also mentioned to remember your audience, as well as, keeping it to a minimum.
Finally, what I took out of this sessions was her checklist:
1. Create a Strong Brand
2. Networking
3. Introduce yourself
4. Connect
5. Follow up, (Twice)
This portion was the most helpful for me, due to this content can be used in all the aspects of looking for a job and even after I land that job. Great speaker if you get the chance to see her, take it, well worth my time.
And then there was Chris Brogan…I was present for his 11:30am keynote speech. He is well known for being an authority on owning your game and boy did he make me feel like, he at least, owns his. Extremely engaging speaker, he had my attention right from the beginning and kept it the entire time. I can honestly say I took less notes and Tweeted less because I was so engaged that at times I almost forgot about my phone, WHAT forgot about my phone, yes! That’s how good he is, Chris went through a brief introduction, of what led him here and why he does what he does, so well might I add. One tag line that did stand out during his 50 mins was, “if we can buy from anyone, why should we buy from you?” This is a key concept a lot of managers, not just marketing and media manager, need to consider. Another huge light bulb for me was “make your buyer the hero”, great advice to have especially on the sales side. All in all, like I mentioned above, Chris was so engaging and his ability to be such a great speaker was outstanding. This is something I struggle with from time to time, so I paid attention to his movements and how he handled himself on stage. His timing was key and not standing still, made the audience feel more relaxed or at least I did. No surprise he is a successful CEO of Owner Media Group. Oh and then there is the fact that it was just nice to hear an East Coast accent. #homesick
Probably one of my most favorite conferences I’ve been to in over a year!