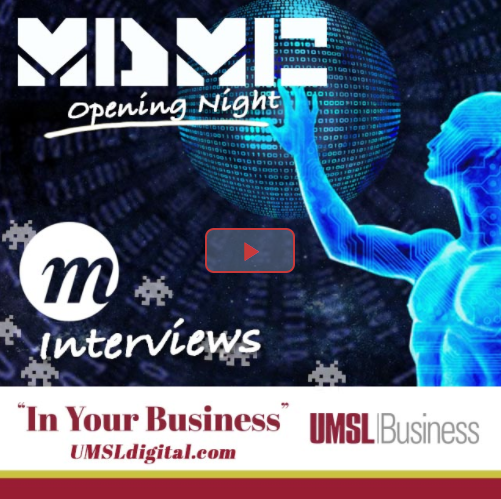 After a long day of activities, guests of the Midwest Digital Marketing Conference (MDMC17) were invited to continue the fun at Momentum Worldwide for the opening night party. Not only was it a celebration of the conference, but it was also the opening of Momentum’s new office space, located downtown St. Louis.  In one of the rooms attendees could virtually play tennis with Maria Sharapova, in other rooms there were video game controllers set up for guests to play against one another and try various VR widgets. During this event, UMSL Business sat down with Momentum’s leadership represented by Elena Klau, Mike Clark, Melissa Hamilton, Donnalyn Smith, and Chris Weil to discuss the world of gaming and their newly released paper “We Know Gamers”, as well as their general insights about business, leadership, and technology. The interviews were later released as part of the podcasting series “In Your Business With UMSL Business”.
UMSL Business first had the chance to talk to Chris Weil, Momentum WW’s Chairman and CEO. As an optimistic leader of the company, Chris Weil explained to UMSL Business how important the role of a leader is and what the three key areas of a company’s leader are. The first area of importance, as Chris Weil highlighted, is strategic vision and leadership on the strategy side. The second key area is the company’s clients, new and old: it is crucial for any business to maintain mutually beneficial relations with its clients and keep them happy to ensure successful partnerships. The third area of importance according to the CEO is HR, i.e. making sure the right people are on the right places throughout the company.
The second person interviewed by UMSL Business was Donnalyn Smith, President of North America at Momentum WW. Donnalyn’s interview shifted gears in regards of questions, which revolved around her role as a leader, and what she looks for in potential team members. According to Donnalyn, when you have great ideas you have happy clients. With that being said, she values smart strategic thinkers, because when you start with a super solid strategy it is almost impossible not to land with an idea that is appealing to a client.
Mike Clark, the current VP/Director of Creative Technology, and Melissa Hamilton, VP/Director of Integrated Productions, were interviewed in a tandem. Having worked for Momentum WW for a number of years, they both have been involved in the release of the company’s recent paper “We Know Gamers”. During the interview, Mike explained what type of technology Momentum WW uses to enhance its brand to clients and partners. Melissa, in her turn, highlighted the relevance of their recent study to the industry and spoke about her personal take-away from the series.
Elena Klau, Senior VP and Director of Strategies and Insights, NA at Momentum WW, was the last person interviewed by UMSL Business. Elena is known for her many accomplishments. She is a strategy lead in the company responsible for working with high profile clients. Elena’s main reason for attending the MDMC17 was to speak about the recent paper “We Know Gamers”. During the interview, she gave a brief summary of the paper, and explained what the goal of the research was. Elena highlighted that the company believed that there was more to the gamers’ universe than what meets the eye, and that was what drove them to research more on this topic.
Those who attended the opening night party can agree that not only does Momentum WW have an amazing new office space, but that this is a company that is very intuitive about the future of technology and marketing. Listen here to the whole interviews with the company’s leaders https://tinyurl.com/umslbusinesspodcast