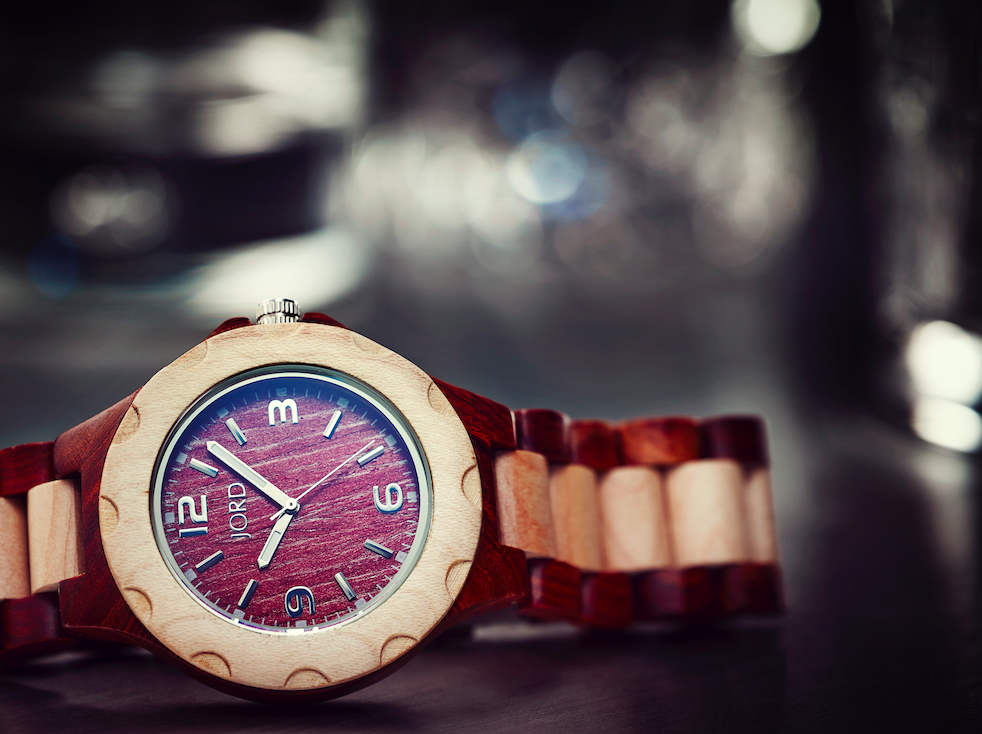 “JORD is a Swedish word for earth, soil, or land. We chose the name simply because we wanted something unique, short, easy to spell, but may cause discussion in how its pronounced. The word reflects what we do as a brand seeking to create premium fashion accessories from the most natural and sustainable of materials.”
-Amir Shah, Co-Founder of JORD Watches Presently, JORD (pronounced “yoad”) offers a premium line of men’s and women’s wood watches. Amir points out, “As we grow, it is our intention to expand into other fashion items that stay true to our sustainable and natural mission while remaining fashion forward.” The brand is owned and operated by people born and raised in the St. Louis area. JORD wants to maintain an image of quality, fashionable, and adventurous. Amir said, “When people think of our products, I want them to feel like the watch or any of our products serve as a unique accent on an otherwise conventional day.”
During February 2013, the concept of a wood watch came from the co-founder’s friend in Europe.  The concept was unique and had not caught on yet, so with an existing channel of fashion bloggers and influencers, they decided to research the idea and see what was possible.  Wood watches were prototyped, tested, and manufactured for 8 months.  The official website launched on November 12, 2013, with their marketing strategy already in position. Amir states, “We have only one strategy and that strategy is: don’t spend money marketing directly to the customer. Instead, market and incentivize social influencers so they can vouch for our product to their audience.So as long as we are actively finding influencers ,gaining trust, and encouraging unique ways of introducing our products to their audience, we have something to measure and grow on.”
What differentiates JORD from their competitors? They are the only wood watch company offering automatic movements. They focus on the quality and design, unlike their competitors. Amir stated, “ We are not focused on being a commodity but rather a premium brand that continues to grow in reputation and durability.”
Their target market are millennials ages 24-40. Many of their customers are younger, but the majority falls into this age group. Amir states, “We are targeting working professionals with discretionary income who are seeking creative fashion accessories beyond just the utility of a watch.”


The company is active on many social media sites including Twitter, Facebook, Vine, Instagram, Pinterest, and others.  They are also testing getting involved with niche fashion networks like Polyvore and Wanelo.  Another part of their advertising and social media is their own customers.  Anyone wearing a JORD watch while sharing pics can attract interest from future customers. Amir says, “ Everyone who wears one of our watches is a walking advertisement. Sharing pics on social media can leave an impression on future customers. Our sole advertising campaigns right now revolve around social media.”
Their social media is firmly measured in their own marketing engine developed internally. Even though they have good numbers on their social influencers, they are still bootstrapping their social media strategy. Amir believes that they can be so much better engaging their audience through social platforms such as facebook, twitter, instagram and others.
Even though the company is not tracking the “chatter” with their products, they are working hard in tracking the SEO, facebook fans engagement, twitter, etc. Their plans for the future are to have their marketing team expand their social programs and develop creative ways to  improve engagement.
Outside of social media JORD was recently featured on FOX2Now with Chief Brand Officer Salman Shah and Retail Director Abby Peskorse and had product placement on NBC’s The Voice. Contestant Taylor John Williams was shown performing with the black watch from the Fieldcrest Series. JORD has also been featured in Alive magazine St. Louis, The Post Dispatch, and has recently partnered up with Touch of Modern. JORD has also had the privilege to work with the Albert Pujols Family Foundation to help generate revenue for them and spread awareness by designing a limited edition timepiece for the foundation.
When asked for any tips on success, co founder Amir Shah had this to say “Start with a market… not the product.  Beat headphones are not the best but they have market share because they tapped a very specific market.  They leveraged the athletes to gain access to their market. Spend your time and money finding the influencers over a target market. Gain their trust and vote of confidence and they will sell the product for you.”
What advice does he have for someone starting their own brand? Amir concludes, “ It does not matter how great the product is. If you don’t have access to a market, creating a brand is challenging. Before you even begin working on a product, clearly identify exactly how you will connect with the market. If your answer is social media, you are not ready. Instead, have an idea of how you can use social media and what resources you have to persist down this path. Instant success is almost certainly not guaranteed.”