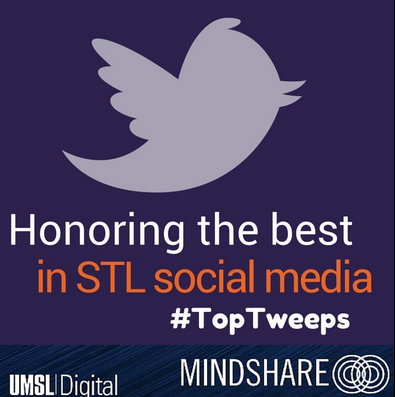 Someone plz nominate me as a #TopTweeps in the @UMSLDigital poll. Otherwise my 1000’s of Tweets & RT’s are nothing 🙂 http://t.co/xExECHNLdU — Gus Gus Fun Bus (@GusGusFunBus) November 17, 2014

@UMSLDigital, my nomination for all around best tweep is @Y98Lance , best traffic guy in the bi state area #TOPTWEEPS
— Alicia Hill (@mshill0909) November 13, 2014

I nominate @markbland as a #TopTweeps for his edgy, informative Twitter feed on #US affairs & the way he engages others. @UMSLDigital
— Mark Fournier (@MarkFournierSTL) November 13, 2014 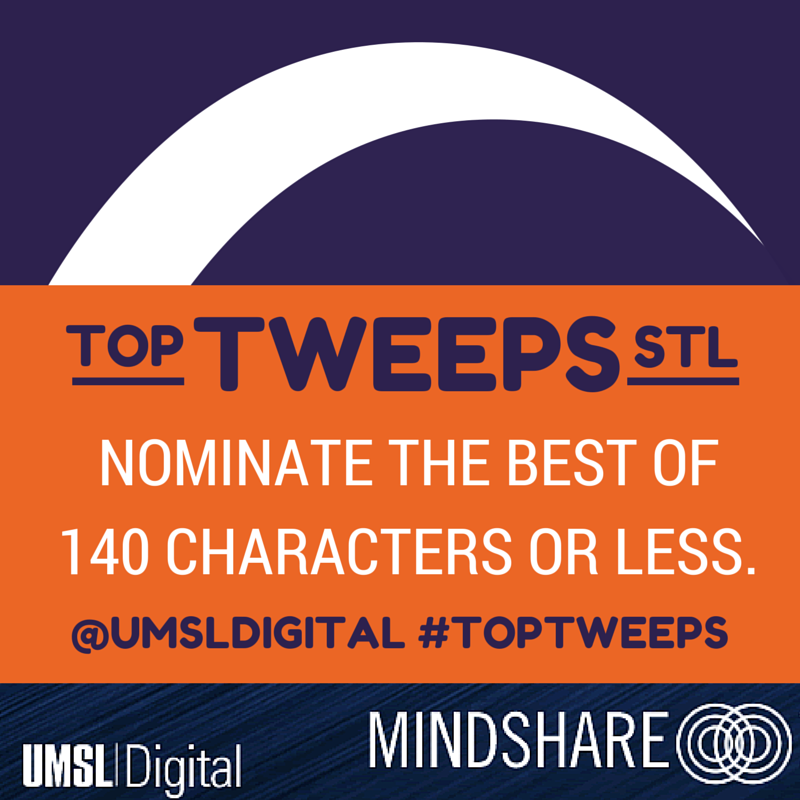 Nominations due via Twitter by November 26th!
By Danni Eickenhorst, @STLDanni
As the source for all things social and digital in St. Louis, we at UMSL Digital Mindshare are looking to curate a short (and surely not definitive!) list of the best Tweeps in St. Louis – that is, a short list of the greatest minds sharing their wisdom in 140 characters or less from the St. Louis region.
So, we want to know your votes for:
BEST OF ART AND ENTERTAINMENT
Nominate your favorite artist, band or other creative who is using Twitter to connect with St. Louis. Share folks who are using Twitter as part of their medium or to drive interest in their work.
BEST BRAND
Share your favorite brand using social media in the St. Louis region. Who is using it right? What makes you connect with them? BONUS POINTS for companies that were started or are based in St. Louis.
BEST BUSINESS LEADER
What person – a local thought leader, executive or entrepreneur – is doing it right in your eyes?
BEST ADVOCATE
Which local tweeps are working to use social media for good? This category may include nonprofits, advocates, volunteers and the like.
BEST OF SPORTSBALL
Amateur, college or pro – nominate the team you think makes best use of their Twitter presence! Tell us why you engage with them and how they got you engaged!
BEST OF FUNDRAISING
Did your favorite nonprofit knock a campaign out of the ballpark using Twitter this year – or did you donate to a St. Louis crowndfunding campaign that leaned heavily on hashtags? Whatever it was, tell us all about it!
ALL AROUND BEST TWEEP
What local influencers do you turn to for information in St. Louis? Whose tweets are you subscribed to so that you never miss out?
Nominations are due by NOON on November 26th. All nominations must be tweeted with #TOPTWEEPS and tagged with @UMSLDigital in order to be counted.
The TOP TWEEPS IN ST LOUIS will be featured on UMSLDigitalMindshare.com the first week in December. BONUS: They’ll receive a shiny new badge for their profile or blog and bragging rights until next year!
Everyone is eligible, but you can’t vote for yourself! Let the voting commence!