UMSL botanist elected to National Academy of Sciences of Argentina 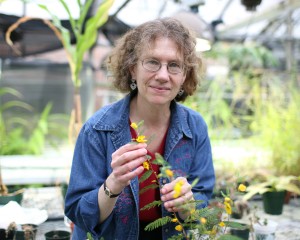 What do Elizabeth Kellogg, the E. Desmond Lee Endowed Professor of Botanical Studies at the University of Missouri–St. Louis, and famed naturalist Charles Darwin have in common? Both have been elected to The National Academy of Sciences of Argentina. While Darwin’s appointment was made quite a number of years ago, Kellogg was welcomed into the prestigious organization this past March in Cordoba, Argentina, where she was presented with a medal.

“The award was a complete surprise, but a tremendous honor,” said Kellogg, of Clayton, Mo. “I think this award strengthens the personal and institutional connections between the botanical institutions of Argentina and those of Missouri.”

A botanist, Kellogg studies the ever-abundant switchgrass and its 15 related species. Switchgrass has the potential to produce up to 1,000 gallons of ethanol an acre, compared to 400 gallons an acre from corn.

Her connection to Argentina comes from a longstanding working relationship with Ana Anton, director of the Multidisciplinary Institute of Plant Biology in Córdoba, and Fernando Zuloaga, director of the Darwinion Botanical Institute in Buenos Aires, Argentina.

“I have known Anton and Zuloaga since 1986, and have collaborated with Zuloaga for more than 10 years,” she said.  “We have published together extensively and I have gained considerable insight from the deep botanical knowledge of my colleagues there, which has made possible a number of projects that I could not possibly have done on my own. Also, I have trained several Argentine scientists in my lab here at UMSL and all have gone on to scientific careers with the national scientific agency (CONICET) in Argentina.”

The academy was formed in 1869 and has advocated for the development and outreach of exact and natural sciences, the exploration of the Argentine territory, and has served as advisor to the government, provincial governments and other scientific institutions.