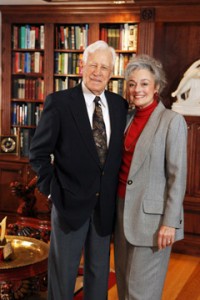 The University of Missouri–St. Louis is saddened by the passing of Whitney R Harris, the namesake of its Whitney R. Harris World Ecology Center. He died April 21 at the age of 97.

Harris’ philanthropic work with UMSL also included the establishment of the Jane and Whitney Harris Annual Lecture on Tropical Ecology and the Whitney and Anna Harris Conservation Forum.

Executive Director of the Harris World Ecology Center Patrick Osborne said Harris appreciated the connection between human rights, peace and justice and the quality of the world’s environment.

“His support of UMSL was not only financial. He provided ideas and guidance and was actively involved and interested in the programs promoted by the Whitney R. Harris World Ecology Center,” Osborne said. “We will strive to live up to his ideals but his guidance and leadership will be missed.”

He played a key role as the assistant U.S. prosecutor at the international military tribunal in 1945 to 1946 that tried leaders of Nazi Germany of war crimes and crimes against humanity. Harris questioned Rudolf Hoess, commandant of the Auschwitz concentration camp and Otto Ohlendorf, a chief in one of Germany’s Special Action groups. He  retained a keen interest in international law relating to war crimes and crimes against humanity. In l998, he was a delegate to the United Nations-sponsored Rome conference that resulted in the treaty that created the International Criminal Court.  In 2001, Washington University in St. Louis, renamed its Institute for Global Legal Studies in his honor. In 2005, he was a keynote speaker at a conference in Chautauqua, N.Y., “Sixty years after the Nuremberg Trials: Crimes against humanity and peace.”

Harris described his post-war experiences in his book, “Tyranny on Trial,” published by Southern Methodist University Press in 1954 with a second edition in 1995. He has also published “Family Law” in 1953 and “Law, Culture and Value” in 1989, and contributed numerous articles to legal journals.

Harris was decorated with the Legion of Merit, Order of Merit, Officer’s Cross (Germany) and Medal of the War Crimes Commission (Poland). He has received much recognition for his charitable work including awards from the National Society of Fund Raising Executives, Multiple Sclerosis Society, Arthritis Society, Asthma and Allergy Society and National Jewish Hospital.

He served on the board of governors of the Winston Churchill Memorial and Library and was a trustee of the National Jewish Center from 1980 to 1990. He was a member of the American Bar Association and chaired the International Law Section from 1953 to 1954 and the Administrative Law Section from1960 to 1961 of the ABA.  e served as president of the St. Louis Japan-American Society and was a member of Phi Beta Kappa, Phi Kappa Psi and Delta Theta Phi.