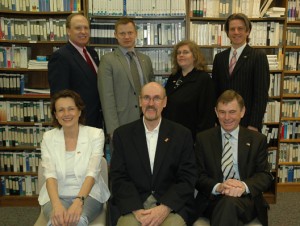 A delegation of the German Bundestag, the national parliament of the Federal Republic of Germany, visited the German Culture Center last week. The small group, including an interpreter, program director and a member of the Chicago Consulate General, watched a presentation by GCC Coordinator Larry Marsh.

Their primary mission was to interview and evaluate Congress-Bundestag Youth Exchange participants and their Midwest host families for a day, but wanted to meet St. Louis Mayor Francis and learn about the GCC. They also visited the Arch and the Cahokia Mounds State Park.

“It’s important the German government is aware what institutions like ours do to promote interest in the German language and culture,” Marsh said. “I hope to continue support like we receive from the Goethe-Institut and other German agencies.”

The German Culture Center was established at the University of Missouri–St. Louis in 1999. Not only a resource for German films and books, the GCC sponsors two workshops for teachers per year, hosts numerous cultural events and serves the greater St. Louis community.