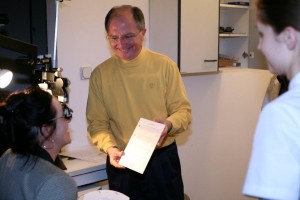 Dr. Timothy Wingert, professor of optometry at UMSL, gives an exam during a recent return visit to Poland where he was a Fulbright Scholar in 2006.

Dr. Timothy Wingert, professor of optometry at the University of Missouri–St. Louis, recently returned to Poznan University of Medical Sciences in Poland where he spent the spring 2006 semester as a Fulbright Scholar. Wingert helped the university’s Department of Optometry and Biology of Visual Science usher in its 25th anniversary.

At an anniversary conference in March, he gave a lecture on the importance of university education in optometry development in Poland. He also discussed lens treatments that benefit ocular health and visual performance.

Both trips broadened Wingert’s global perspective on the practice of optometry.

“The trips to Poland showed me that there are many underlying issues in the development of this and other professions,” he said. “There are great differences in the priorities of optometry in Poland compared to other countries in Europe. It reinforced for me what a broad profession it is and how it affects the quality of life for people in many different ways.”

Dr. Bogdan Miskowiak, head of the Department of Optometry and biology of Visual System at PUSM, expressed in a letter to Wingert his gratitude for the UMSL optometrist’s participation in training PUSM optometry students.

“For my staff and our students, it is always valuable to benefit from foreign optometric experts’ experience,” Miskowiak wrote.

Wingert’s 2006 stint in Poland as a Fulbright Scholar lasted about five months. He worked with his hosts regarding vision conditions that affect children. He’s noticed many positive changes with PUSM’s optometry program, upon returning there four years later.

“The biggest change is the number of graduates, and how much they participate in the future of the program,” said Wingert, of Des Peres, Mo. “But the students had always been very enthusiastic and energized.”

Wingert said he will maintain correspondence with PUSM faculty and student. While he has no plans to return to PUSM, he said he would readily return if the opportunity presented itself.