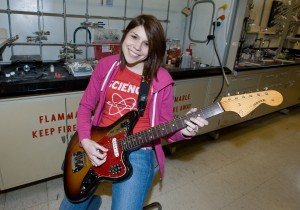 A quick glance at Laurel Mydock in her white lab coat and you might not guess she plays guitar in a garage band on the weekends. Upon closer inspection, her black Converse All-Stars and a Ramones patch on her hooded sweatshirt might give you some indication.

The 29-year-old St. Louis resident just earned her doctorate in chemistry at the University of Missouri­–St. Louis on Saturday and is geared up for a post-doctoral position at Washington University in St. Louis studying steroid chemistry.

Her love of art and science started very young. The self-described inquisitive tomboy grew up playing “every sport known to man.” This included Taekwondo, speed skating, soccer, softball, skateboarding and your basic playing in the mud. She was raised in Kansas City, Mo., and found math, art and music of equal interest. At 14, she got her first guitar.

“I told my mom if I didn’t get a guitar for my birthday, it would be the worst day ever,” Mydock said. “My mom first got me an acoustic guitar, but we traded it in for an electric one because there weren’t enough frets to play Metallica.”

Mydock sat on her bed with headphones learning to strum along with Nirvana and Metallica.

“No one introduced me to music really,” she said, adding that her mom liked Julio Inglesias at the time. “Once I found out you could reproduce what you heard on the radio I was hooked.”

She went on to Lindenwood University in St. Charles, Mo., on a scholarship.

“I was an art major. But I kept getting Bs and it bothered me that art was so subjective,” Mydock said. “So, I made the switch to mathematics because there is only one answer.”

Because she earned college credit while still in high school, Mydock earned her bachelor’s degree in just three years. She took a year off and worked at Sally Beauty Supply and played in bands. It was at Sally’s she had the epiphany that led her to UMSL.

“A woman came in and needed a new curling iron. They are sized by diameter,” Mydock explained. “The woman knew the circumference she needed, but didn’t know how to figure out the diameter. I did. And it was then I realized I was wasting a math degree.”

Mydock came to UMSL for a second bachelor’s degree in chemistry. Her adviser, Alexei Demchenko, associate professor of chemistry at UMSL, taught her organic chemistry class.

“After I did really well in that class, he suggested I go to graduate school,” she said. “It had never even occurred to me.”

Mydock went on to study carbohydrate chemistry under Demchenko. She explained the carbs she works with are not of the bagel variety, but actually cover our cells and come in handy when working with drug therapies. Her dissertation explored the methodology and mechanistic investigations of carbohydrates.

Throughout graduate school she kept playing music. In the early aughts, she was in the punk band Resistall. After a few years, she and her boyfriend-turned-fiance, Scott Lasser, started playing together. They got Morgan Nusbaum to play bass and formed The 75s, a power-pop garage band that plays throughout the Midwest. They currently play at venues like Off Broadway, Lemmons and the Schlafly Tap Room in St. Louis.

They have released one LP, “Extra Francy,” and one EP, “Stereo.” Their song “Finders Keepers” was on the 2008 Village Voice Pazz and Jop poll, placing #776 on the Singles List and also was used on the soundtrack to “Shadowland,” an independent thriller produced by St. Louis filmmakers. The 75s contributed an original holiday song to the 2007 edition of The Bert Dax Cavalcade of Stars Christmas compilation CD, “A Very Bert Dax Christmas, Vol. 6.”

Mydock said she is excited for her post-doctoral work in medicinal chemistry.

“I feel like I’m helping a bigger cause,” she said. She doesn’t see any problems with her next professional step and the band.

“Playing in the band is cathartic,” Mydock said. “I like having many dimensions to my life.”