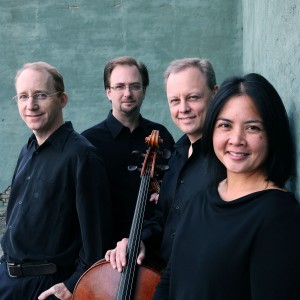 Recognized as one of America’s finest chamber ensembles, the ASQ will perform four concerts – “Death and the Maiden,” “Arianna by Request,” “Quint-Essential!” with special guest pianist Anton Nel and “Titans of Style” – in the E. Desmond and Mary Ann Lee Theater at the Blanche M. Touhill Performing Arts Center. Subscriptions go on sale at 10 a.m. June 7. Single tickets go on sale Aug. 9.

The ASQ, comprised of violinists John McGrosso and David Gillham, violist Joanna Mendoza and cellist Kurt Baldwin, has been based in St. Louis since 2000 and is the quartet-in-residence at the University of Missouri–St. Louis.

“The Arianna’s audience has significantly expanded over the last couple of years, leading to full and enthusiastic houses,” said John Cattanach, managing director of the Touhill.

For the upcoming season, the ASQ has created the concert series with the connoisseur as well as the newcomer in mind.

“Our goal in programming is to present the powerfully expressive masterpieces of the quartet literature,” Baldwin said, “while simultaneously keeping the concerts new and interesting for our audience.”

The ASQ will kick off its St. Louis series with “Death and the Maiden” on Sept. 10. The evening will be a celebration of quartets by three composers whose dramatic creations helped chart the course of classical music. Antonin Dvorak’s alluring String Quartet in E-flat Major, Op.51 presents a landscape of rolling beauty, filled with Czech folk music that sparks the imagination. Dmitri Shostakovich’s Quartet No.7 expresses the breadth of life’s jagged emotional journey in this piece dedicated to the memory of his wife. Franz Schubert’s tour de force, the Quartet in D minor, “Death and the Maiden,” closes the program with a musical drama that captures the power and fragility of the human experience.

For “Arianna by Request,” on Oct. 29, the ASQ will turn to its audience to choose the line up in this uniquely interactive concert experience. Inspired by the support of the hometown crowd, the ASQ compiled a list of 12 masterpieces from which concert-goers will choose. The top three vote-getting pieces will be performed in this concert. Patrons can go to http://touhill.org to vote beginning June 7.

The ASQ will close its 2010-11 St. Louis concert series with “Titans of Style” on May 6. It will feature three landmark quartets, whose innovative languages and styles forged new paths for musical expressivity. Mozart’s Quartet in A Major, K.464, is a tonally adventuresome work that sets the stage for the future of classical music. As Mozart said about this work in 1785, “Look what I could produce, if only you were ready for it.” Bela Bartok’s groundbreaking Quartet No.5 introduces a new sonic world that shows the composer at the height of his compositional genius. Finally, Claude Debussy’s exhilarating Quartet in G minor takes listeners on a nuanced odyssey through French traditions, world cultures and Debussy’s compositional ingenuity.

“And as part of our Touhill concert series, we are thrilled to welcome the award-winning Parker Quartet, Jan. 28, 2011,” Baldwin commented. “They are an exciting, superb group. Augmenting our series of concerts to include other quartets from around the country, especially groups as fine as the Parker, helps enhance our audience’s chamber music experience in St. Louis.”

Hailed by The New York Times as “something extraordinary” and by The Boston Globe for their “fiercely committed performances,” the Parker Quartet have rapidly distinguished themselves as one of the preeminent ensembles of their generation. The Parker Quartet was awarded the prestigious 2009-2011 Cleveland Quartet Award. Given biennially by Chamber Music America, this award honors and promotes a rising young string quartet whose artistry demonstrates that they are in the process of establishing a major career.

Each ASQ concert and The Parker Quartet concert are E3! performances, Explore – Experience – Engage. E3! pre-show discussions, which begin 50 minutes prior to the performance, and post-show receptions are free to ticket holders.

Subscriptions and single tickets will be available at the Touhill Performing Arts Center Ticket Office, online at http://touhill.org or by phone at 314-516-4949.

The Touhill’s Ticket Office is located at One University Blvd. in St. Louis County (63121). All St. Louis-area students receive a 10 percent discount on two tickets with their I.D. Group and senior discounts are also available.

The Touhill Performing Arts Center is located on UMSL’s North Campus, just 10 minutes from Clayton. (Exit No. 240 from Interstate 70.) There is ample free parking, and the UMSL North Campus MetroLink Station is just steps from the Touhill’s main entrance.