Dickson String Quartet: The family that plays together, stays together 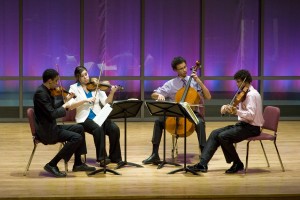 It’s been said that the family that plays together, stays together. The Dickson family gives new meaning to that old adage.

Ashley, Benjamin, Brandon and Daniel are siblings and prodigious musicians performing now for five years as the Dickson String Quartet. The familial foursome recently finished its freshman year at the University of Missouri–St. Louis.

They were drawn here from Battle Ground, Wash. (just under an hour north of Portland, Ore.), by the opportunity to work together under the tutelage of UMSL’s resident quartet, the Arianna String Quartet.

The Dicksons first crossed paths with the Arianna several summers ago at the Britt Classical Festival in Jacksonville, Ore. The Arianna teaches a two-week string quartet academy at the Britt each year and the Dicksons were repeat students. Each of the siblings agreed it was an eye-opening experience.

“During that time, we realized there was so much more to music than we ever imagined,” recalled Daniel Dickson, the 17-year-old cellist for the DSQ.

“They just made it seem so easy,” added DSQ violist Benjamin Dickson, 21. “They’re just playing on a whole different level than I’ve heard before.”

The admiration is a two-way street. Kurt Baldwin, cellist in the ASQ, remembered the Dicksons leaving a strong first impression.

“They have this unique enthusiasm, energy and hunger to learn, which you can’t be anything but affected by,” he said.

Baldwin also found it striking that the quartet was comprised of siblings.

“It’s hard enough to be one musician, but to have a family that’s willing to play together and so well,” he said, “I mean, they really are wonderfully generous, compassionate and patient students.”

ASQ violinist John McGrosso said it was great to have a connection with a family quartet.

“(The Arianna is) kind of a family of musicians too,” he said. “So it’s sort of like from one family to another. It works out very well.”

The Dickson children – there are 10 total – were homeschooled and required by their parents to take two years of piano prior to picking up any additional instruments. Fueled by a desire to play violin, Ashley and Brandon Dickson took to the ivories right away. Benjamin was an exception. He said he initially lacked interest and focus. Fortunately, he had a great piano teacher who was able to motivate him. He was soon looking up to his big brother Brandon who had taken up violin. Benjamin didn’t want to be left behind.

“Then about two years after I started violin, Daniel took up cello,” Benjamin said. “One of my instructors mentioned, ‘If one of you switches to viola, you’ll have a string quartet.’ I was like, ‘What’s a viola?'”

Upon hearing it, he immediately fell in love with the big, deep sound of the viola. The once reluctant musician soon added it to his repertoire of instruments he plays (the aforementioned plus acoustic guitar) and the DSQ was born.

The quartet has gone on to play weddings, dinner parties and school assemblies. Members of the Arianna String Quartet described the Dicksons as being self-directed and entrepreneurial. Even before enrolling at UMSL, the Dicksons set up their own concerts and created a professional-looking website, Facebook page and blog – all devoted to the DSQ.

Of course, working together is not without its challenges. Ashley, for example, points out that it can be difficult being the only girl in a group dominated by guys.

“But I don’t know what I’d do without them,” the 20-year-old violinist said. “We learn so much from each other.”

Brandon, 21, said they shared many similarities, but have different personalities. That doesn’t lead to too many quarrels.

“The thing is, you can’t get really mad at them because you’re going to have to face them again after practice at home,” he said. “Overall, it’s a really cool experience knowing that we can communicate without words because we just know each other so well growing up together as a family.”

That support extends throughout the Dickson family. The Dicksons’ parents and five siblings (their oldest sister lives in Colorado) moved to Florissant, Mo., a few months after they started school at UMSL. Generally speaking, the four siblings that make up the quartet enjoy living in a more urban setting, especially when it comes to having access to a performance space like the Blanche M. Touhill Performing Arts Center at UMSL.

“Performing in the Touhill has just been an incredible experience for me,” Brandon said. “In Washington, there were a couple halls that were really nice, but (the Touhill) blows those away.”

Despite being home-educated their entire lives, the Dicksons said they made a smooth transition to public-school life at UMSL. In addition to their quartet work, they’ve taken on additional performance roles at the university, and they’ve enjoyed learning at the Pierre Laclede Honors College.

“They’re here and part of our community and really in the first semester, they became leaders within the music department and on campus,” said Baldwin, ASQ cellist. “So the years that are going to follow are going to be very fun and very special to watch.”