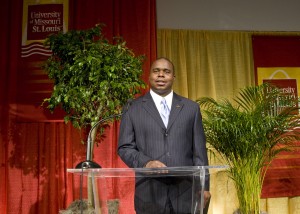 Kelcy Siddall, a graduate student in public policy administration at UMSL, speaks at the annual Chancellor's Report to the Community in May.

Kelcy Siddall was fortunate. He grew up in a rough neighborhood, but at an early age, his family instilled within him the importance of a college degree. Now a University of Missouri–St. Louis graduate student, Siddall wants to inspire students who feel a higher education is beyond their reach.

“There’s a lot of stigma when you talk about a black male,” said Siddall, who holds a bachelor’s degree in economics from UMSL and is working toward a master’s degree in public policy administration. “I want to change the perceptions of that and show people that we can accomplish a lot of things. If I can act as a role model for a young black male growing up in a rough neighborhood, then I will do that.”

Growing up, Siddall was a student in the Normandy School District. He received good grades, was involved in ROTC and played outfield on the baseball team, but mostly kept to himself. He was introduced to UMSL through the Bridge Program Saturday Academies, a pre-collegiate program offered at the university.

“It showed that going to college is very real, and it’s possible for you to go,” Siddall said of the program.

Despite his academic achievement in high school, college was still just out of reach in terms of affordability. He took a year off from school and joined the Missouri Air National Guard where he served as a mechanic. When it came time to pick a university, he chose UMSL and soon the door of opportunity swung wide open, he said.

Siddall, once a self-described shy kid who remains soft spoken, flourished as a student leader. He got involved with the Student Senate Organization, Black Leadership Organizing Council, Helping Hands Student Organization, Associated Black Collegians, Delta Sigma Pi business fraternity and University Program Board. He held leadership roles in most of the groups and attained the office of vice president of the Student Government Association.

Siddall currently serves as the graduate assistant for UMSL’s Students of Service, a program funded through a multiyear grant. Its goal is to collaborate with local nonprofit Beyond Housing to help rehab homes in the Pagedale, Mo., community and provide service-learning classroom assistance in the Normandy School District.

Siddall said it’s been gratifying to give back to his community.

“I feel that a lot of folks kind of disregard their community, or they leave and forget about it,” he said. “This community has a lot of struggles. Someone needs to address that.”

In a UMSL Magazine article about the SOS program, Normandy School District Superintendent Stanton E. Lawrence singled out Siddall as a role model.

“The more our students see young people in college, the more it raises the possibility we will see more of our students become like Kelcy,” Lawrence told the magazine.

Once Siddall receives his MPPA, he wants to work in an urban community to help with economic development or within a public school district. Either way, he wants young students to follow in his footsteps and make higher education a reality.

Siddall knows firsthand that there will be obstacles along the way. It might not be easy, he said, but anything is possible if you put your mind to it.