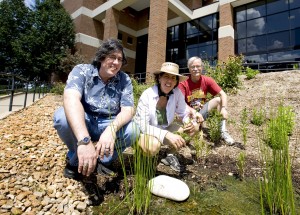 Perched halfway up a steep hill in front of the Computer Center Building at the University of Missouri–St. Louis, a new garden may not catch the eye of most passersby. But thanks to the sometimes Herculean efforts of a team of volunteers, the garden is blossoming.

Joseph Martinich and Vicki Sauter, both professors of business administration, longtime amateur gardeners and husband and wife, were the impetus behind the project to create a new garden in a rocky area facing West Drive.

“It’s probably the most difficult spot on campus to grow anything,” said Martinich of the steep slope. “Whenever it rained, water would rush down the hill on to the sidewalk and most of the winter it was a sheet of ice.”

Last fall, Martinich and Sauter enlisted a group of faculty, staff, students and alumni to tear out what little vegetation was left on the slope and start anew. Dave Gellman, an information specialist-administrator in Information Technology Services, offered his own services and those of his sister Beth, a landscape designer.

“I thought we would do a quick little facelift on the bed – dig up some weeds and plant a few flowers. Boy was I wrong!” said Sauter.

Martinich said they started ripping out mostly vines and weeds and then hit nothing but rock and really bad soil.

“Seventy percent of the slope was rock, so we used them to build the retaining wall,” said Martinich. “We also dug up and moved a small tree to a more favorable position. We all came back in the spring for more ripping and planting.”

The group looked to Beth Gellman for a plan and then spent several weekends making it work.

“As soon as I saw the site I knew it was going to be more than simply cleaning it up and making it look pretty,” Beth Gellman said. Rainwater and the steep slope caused serious runoff. Her remedy was to create a water garden with native plants and a bioswale, a shallow, rock-lined depression designed to capture the rainwater before it cascaded on to the sidewalk.

“The water in the swale lasts maybe five days before it aspires into the air and sinks into the ground to be absorbed by the sedge we planted in the swale,” she said.  Scattered about the hill are hardy Missouri perennials such as echinacea, cardinal flower, shrubby St. John’s wort and iris.

Beth Gellman said the garden looks a little bare now, but she assured the volunteers it would fill out over the next year or two. The shrubs are expected to grow seven feet tall and nearly as wide.

Sauter said despite all the hard work, the garden story has a happy ending.

“What started as an attempt to improve the aesthetics of the building turned into an example of a sustainable flower bed for the campus,” she said.  “When it matures, the native plants should require little or no maintenance yet should look attractive.  In addition, the bioswale will help with a problem of water runoff.  We made it pretty and provided a good example of what could be done with native plants.  ”