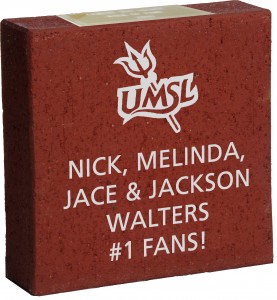 Pictured is a rendering of a brick from the Mark Twain Legacy Plaza Brick Campaign.

Dale Westerholt responded to the call to help renovate the Mark Twain Athletic & Fitness Center faster than a hitter drives a hanging curve ball into the left-field bleachers.

Westerholt was one of the first individuals to purchase a commemorative brick that will be included in a new courtyard being built at the entranceway to the Mark Twain facility. The Department of Athletics initiated the Mark Twain Legacy Plaza Brick Campaign in late June to raise funds for multiple improvements to the nearly 40-year-old building.

“I would not have attended college if not for baseball,” Westerholt said. “I often tell people I went to college to play baseball and accidentally graduated. I owe a lot to UMSL.”

Westerholt was a right-handed pitcher on two UMSL teams that participated in the NCAA Division II World Series. After graduation, he accepted a position in operations with State Farm Insurance – located first in St. Louis and then relocated to California in 1986. He retired after 34 years with the company.

There are a variety of sizes of bricks and prices available for individuals to consider in the brick campaign. With each brick purchased, individuals will also receive an identical replica, made of the same material as those used in the Mark Twain Legacy Plaza.

The commemorative bricks are available in three different sizes and feature up to six lines of text, beginning at $165. The bricks also feature an option of including either the Tritons or Rivermen logo.

Funds from the brick campaign will be used to renovate and expand the fitness areas to better accommodate student athletes and the community, renovate existing space for team and office use, and to create a batting cage facility for softball and baseball.

Full details of the brick campaign can be found at http://www.umsltritons.com/brick, where fans can also order a brick. More information on the Mark Twain Legacy Brick Campaign can also be obtained by calling 1-877-NO1-UMSL (661-8675).

UMSL’s brick vendor for this project is Fund Raisers, Ltd., the same company used by the St. Louis Cardinals in their brick campaign as part of the new Busch Stadium, which sold more than 22,000 bricks.