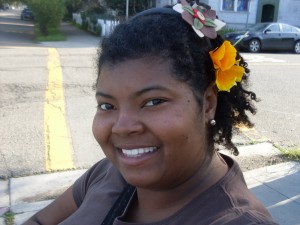 Danielle Lee earned her PhD in biology from UMSL and is now bringing science to underserved areas in St. Louis.

Danielle Lee’s enthusiasm for making science accessible to all is contagious. One minute talking to her about urban ecology outreach and you want to sign up for one of her programs. Her passion is what led her to be named one of St. Louis Magazine’s 45 people whose ideas might most change St. Louis.

As the new urban outreach coordinator for Science and Citizens Organized for Purpose and Exploration, commonly known as SCOPE, Lee is taking science out of the classroom and straight to the people.

One of her latest projects with SCOPE was to hold the first-ever science fair at the Missouri State Fair in Sedalia. It was four days of making science fun for the masses. More than 15,000 people engaged in hands-on projects at the fair.

“I love informal science education,” said Lee, who earned her doctorate in biology from the University of Missouri–St. Louis this past May. “It gives people permission to study science and enjoy it.”

One of main events was “Aerospace Friday” during which more than 300 people from all over the state attempted to break the world record for water bottle launching.

Did they do it?

“We made a great effort,” Lee said.

Outside of events like the fair, Lee spends most of her days working to get science and technology into underserved communities in St. Louis.

“We want to show people in these communities that not only are science and technology fun and interesting, but they can lead to good careers,” she said.

This idea is nothing new to Lee who has been promoting urban ecology for the past four years with her blog, Urban Science Adventures, in which she chronicles the intriguing ways science is around us every day in the city.

“I think my blog is why I got this job at SCOPE,” she said. “It has really opened up real-life opportunities for me.”

Lee has received many awards for her blog, including a 2009 Black Weblog Award.

She credits a fellowship she received while at UMSL for her introduction to urban science education. For two years she worked alongside biology teachers in the Normandy (Missouri) School District.

“I learned how to be a better teacher and a better communicator when talking about science,” Lee said. “I love to help underserved students because if you can get them to do some science without worrying about grades, etc., and make references to things they already know, they realize this is stuff they already knew about and it all clicks.”

The idea that got the attention of St. Louis Magazine was an extension of Lee’s outreach – to have scientists run after-school clubs and provide research experiences for children in underperforming school districts. College students could tutor in math, reading and science. All of this would be in exchange for student loan forgiveness.

“In my program, for every 100 hours of service, volunteers would have $1,000 of their student loan debts forgiven,” Lee wrote in her proposal to the magazine. She figures $10 million could support 10,000 volunteers working 100 hours.

In the meantime, Lee will continue to help people rediscover the amazing world of science that surrounds them every day.