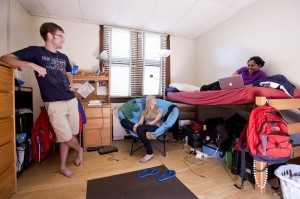 Optometry students hang out in a room of the Eye Live and Learn community in North Villa at South Campus. Pictured, from left, are ELL resident advisor Jake Hayward, Rachel Lamis and Shivali Desai.

They come from as far away as Canada, Florida and several states scattered throughout the Midwest. Most of these 20 optometry students are a long way from their families. But they’ve started a new family in the Eye Live and Learn Community at the University of Missouri­–St. Louis.

ELL makes up two floors of Villa North on South Campus. All of the residents are optometry students, ranging from first-year students living there the entire academic year to fourth-year students, who might only reside there for the duration of an eight-week externship.

Rachel Lamis, a third-year optometry student, said she liked the familial atmosphere generated in part by features like a communal family room and kitchen.

“I don’t really get the feel of a dorm or an apartment here,” she said. “It just feels like we live in one big house together.”

That’s the atmosphere we were hoping to generate, said Dr. Barbara Brown, manager of student and special services in the college, who helped create the ELL.

“We have many optometry students who come from so far away that they can’t just pick up and go back home whenever they want to,” Brown said. “This way, they feel like they have a family here.”

Each student living at ELL has a spacious and furnished single room with most utilities included, in addition to cable hook-up, wireless high-speed Internet access and a land-line phone hook-up. And then there are the amenities not listed in the brochure like the family dinners. Every week or so, a few of the students will cook a large meal for their fellow ELL residents.

“It’s just a great way, outside of class, to have some fun and develop relationships,” said Jake Hayward, a second-year optometry student and the ELL residential advisor.

Another perk? The leadership. The ELL population is a diverse mix of all years of optometry students. So a first-year student, for example, can discuss externships with fourth-year students and receive advice from second-year students who had the same classes the previous year.

Aside from camaraderie and affordability, many of the students expressed that convenience was another key factor in their decision to live at the ELL. North Villa is just footsteps away from Marillac Hall where optometry classes and pre-clinics are held. The location also affords access to on-campus libraries, and allows for more study time – a precious commodity for students studying in a professional degree program.

“They’re very dedicated and hard-working,” Sally Truong, marketing student services coordinator for the Office of Residential Life and Housing, said about the students. “And they really are a family. They cook together, they eat together and they study together. Most of them aren’t from the St. Louis area, so they also rely on each other and explore the city together.”

ELL is one of several themed learning and living communities at UMSL. At Oak Hall, UMSL’s newest residence hall, student-residents can live in health and sciences; advocacy and diversity; honors and education; and business and administration themed communities. All freshmen and returning second-year students are placed in rooms located on floors labeled the First-Year Experience and Second-Year Experience, respectively.

“Each of those communities is led by an upperclassman within his or her respective major. They have programs for the residents and try to make the atmosphere fun, but relatable to their major and campus experience,” Truong said. “The First-Year and Second-Year Experience floors include efforts to teach the residents how to eat healthy, how to avoid getting ‘the freshmen 15’ and study tips.”