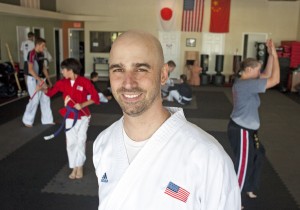 Alberto Friedmann, 42, is a doctoral candidate at the University of Missouri–St. Louis and head coach for the U.S. Martial Arts Team.

Acting as head coach for the U.S. Martial Arts Team takes a lot of time – about 30 hours a week to be exact. Add on the time spent pursuing a doctoral degree in teaching-learning processes with an emphasis in kinesiology at the University of Missouri–St. Louis, along with working as a graduate assistant and teaching a weekly karate class, and you’ve just glimpsed a week in the life of Alberto Friedmann.

Friedmann, 42, is an eighth-degree black belt and world champion martial artist. He began competing in 1993 and he’s an inductee in the Martial Arts Hall of Fame. He’s also earned 14 medals – 12 gold, one silver and one bronze – from the World Martial Arts Games between 2000 and 2006. Most recently, Friedmann earned a bronze medal at the Maccabiah Games in Israel last year as part of the U.S. Martial Arts Team.

At 21, he was diagnosed with Ehlers-Danlos Syndrome. A connective tissue disorder caused by a defect in the synthesis of collagen, Ehlers-Danlos comes in many varieties. Friedmann said the syndrome affects his muscles, bones and skin.

“I was osteoporotic at 14 and my joints dislocate, my bones break easily and my tendons and ligaments tear easily,” he said. “So I did what anyone with weak joints and osteoporosis would do and got into full-contact martial arts.”

As head coach, Friedmann said he’s been working hard with the U.S. Martial Arts Team to get them ready for the fifth World Martial Arts Games Sept. 17-19 in Las Vegas.

“This is the first time the event has been held in the United States, and we’re really excited to be the host country,” he said. “We have confirmation from 26 countries to participate this year and there should be between 700 to 1,000 competitors, so it’s huge.”

There are 105 members on the U.S. Team and they’re spread throughout the nation. Each section of the country has regional coaches who provide team updates to Friedmann. The coaches also deliver daily two-hour workouts for team members along with a training diet, but Friedmann said a large amount of actual coaching is done through video.

“People take video of team members doing their forms or their matches and then the coaches will review the footage and provide feedback,” he said. “Video and the Internet are really beneficial for coaching right now. There’s no way this could otherwise work.”

Friedmann meets with the 17 Midwest team members every other Sunday for a six-hour workout that includes conditioning followed by forms work, sparring and mental work.

“We’re in good shape for the upcoming World Games, and the U.S. Team is still very much the team to beat,” Friedmann said. “We have a 98 percent gold medal rate, and if someone is on the team, we expect them to win gold. They’re here because the coaches believe they can, and will, do it.”