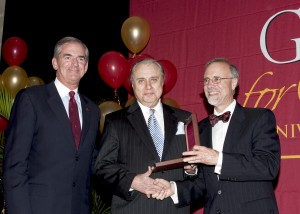 Nicholas Karakas, the man behind the growth of Greek Studies at the University of Missouri–St. Louis, received the E. Desmond and Mary Ann Lee Medal for Philanthropy Sept. 16 at the university’s annual Founders Dinner .

The Founders Dinner celebration attracted more than 700 people to the Ritz-Carlton, St. Louis in Clayton, Mo., who came to honor the university’s faculty, staff, distinguished alumni and its many donors. Among the donors honored were new Partners for Greatness, those donors who contributed a million dollars or more during the university’s Gateway for Greatness Campaign. This year’s Partners for Greatness include: The Boeing Company, Emerson, Edward Jones and Stanley and Dr. Terry Freerks.

Martin Leifeld, vice chancellor of university advancement, announced the university exceeded its campaign goal of $100 million two years before its scheduled end. He then announced the Gateway for Greatness Campaign would continue until 2012 with a new goal of $150 million.

Karakas received the medal created in 2006 to honor Des and Mary Ann Lee for their extraordinary philanthropic support and visionary leadership of the university over the years. The Lees were the first recipients of the medal, which has been given each year to those individuals whose generous support has touched the lives of UMSL students, the university and the greater St. Louis area in exceptional ways.

For many years, the Karakas family has contributed to the university’s scholarship programs. In the 1990s Karakas led a successful effort to endow a professorship in Greek Studies, and he continues to contribute to its success. The professorship is held by Michael Cosmopoulos, the Hellenic Government-Karakas Family Foundation Endowed Professorship in Greek Studies at UMSL. Karakas also played a central role in establishing the Nicholas and Theodora Matsakis Hellenic Culture Center and has contributed a large collection of valuable books to the Karakas Family Library at the cultural center located in 210 Lucas Hall.

In 2008, Karakas pledged a family gift of $1.5 million to UMSL to establish a chair in Byzantine History and Orthodox Christian Studies. He also established the Karakas Family Foundation Scholarship, providing financial support for students interested in Greek culture and Hellenic ideals.

UMSL chancellor Tom George lauded Karakas for his enthusiastic support of the center, university and region.

“Nicholas Karakas has consistently shown his dedication to the preservation and dissemination of Greek culture,” George said. “We are proud to honor a person who has made so many contributions to his culture and this university.”