Theater scholar to make UMSL debut with ‘The Crucible’ 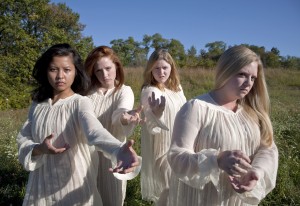 Witchy women: UMSL students (from left) Regine Fernandez, Sophie Powell, Kate Rehagen and Samantha Smith portray characters from “The Crucible” who conjure up a spell in the woods.

Salem, Mass., 1692. A community is divided by accusations of witchcraft. When tales from several troubled girls are taken as fact, the small town descends into panic and persecution. As accusations fly and suspicion is accepted as evidence, a deadly chain of events is set into motion.

“The Crucible” is an intense and timeless work from Arthur Miller, who is generally considered one of the greatest American playwrights of the 20th century. Tlaloc Rivas, assistant professor of theater at the University of Missouri–St. Louis, will make his UMSL directorial debut with the university’s fall production of the play.

Rivas recently joined the UMSL faculty after a stint as a freelance director in New York. He was named one of 2008’s People of the Year by NYTheatre.com and is renowned as one of the country’s established interpreters of classic and contemporary stage works. He has worked with many theater companies, including El Teatro Campesino, The Public Theater and Lark Play Development Center. In addition to Rivas, the following UMSL faculty members are working on the production: Felia Davenport, costume design; Glen Anderson, scenic and lighting design; Megan Monaghan, dramaturg and dialect coach; and Rob Scoggins, choreography.

The cast will be comprised of UMSL students and professional guest artists.

The Touhill is on UMSL’s North Campus, One University Blvd. in St. Louis, Mo. 63121. “The Crucible” is sponsored by the College of Fine Arts and Communication at UMSL.