Seabird on Galapagos Islands anything but common, UMSL researchers discover 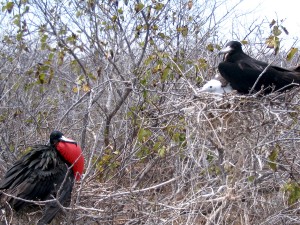 UMSL researchers discovered that the magnificent frigatebirds on the Galapagos Islands are genetically different from their mainland counterparts.

A common seabird on the Galapagos Islands, historically thought to be genetically the same as its mainland counterpart, finally got the recognition it deserves – as its own unique bird. Now it might land on the endangered species list. University of Missouri–St. Louis researchers had their findings about the magnificent frigatebirds published in the scientific journal Proceedings of the Royal Society B.

Parker, who with UMSL students has been studying birds and parasites on the islands for years, said no one knew the magnificent frigatebird was endemic to the area.

“We had thought they were not genetically isolated,” Parker said. But once researchers compared their notes on the genetic make-up of Galapagos and mainland frigates, the difference was undisputable. Parker estimates the birds came to the Galapagos 250,000 years ago and evolved over that time.

The story was covered in several national science publications including ScienceDaily. Read the story here.

Note: The name frigatebird refers to the 15th century term, frigate, for war or pirate ships.  Frigatebirds are the only seabird that does not fish itself, but rather knocks other birds to get their bounty.