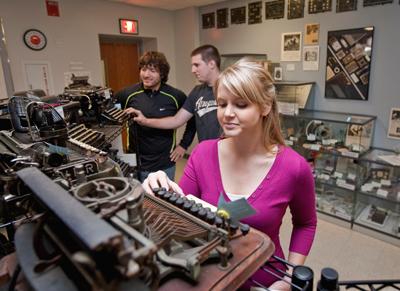 Kathryn Vogel examines the keys on a typewriter on Monday, while David Adams (far left) and Zack Bernat discuss the collection at Grace's Place, a computer museum at UMSL. Vogel, Adams and Bernat are seniors at the university.

Have you ever been on the second floor of the Computer Center Building at the University of Missouri–St. Louis and thought, “What is all this?” Well here’s your answer. It’s Grace’s Place, a computer museum honoring the “Mother of Computing,” Grace Murray Hopper.

Grace’s Place was created in 2004 by Vicki Sauter, professor of management information systems at UMSL. Sauter established the museum, located in the second floor foyer of CCB, to display old computer parts and teach students about the evolution of computing.

The museum has a range of exhibits from early tubes and analog computers, to examples of the growth in home computers and microcomputers over the years. Many computers are disassembled to display individual components, motherboards and interesting artifacts.

Currently an exhibit of old typewriters are on display and soon various calculators will be included in the museum.

All items are given or loaned to the museum and the donors names are displayed next to each piece.

“It’s important to them,” Sauter said. “To computer people, giving away your first PC means a lot and to have a place to display it, that it can be seen by others and help them to understand how computers got to where they are today, that means a lot to them.

This museum is named in memory of computing pioneer and Rear Admiral in the United States Navy Dr. Grace Murray Hopper.

“I felt it was important for people to learn about Grace and to remember what she did,” Sauter said.

Hopper, who died in 1992 at the age of 86, was a pioneer in the development of computers. She created the computer language COBOL, which is still used today in a number of business applications worldwide. Hopper educated young people about computers and was well known for using physical representation to explain abstract concepts. She established the idea of using computer languages to solve business problems, as well as making the language accessible to people.

The permanent and ever-growing museum illustrates the beginning of computers and how the machines have evolved over the years.

Kathryn Vogel, a senior information systems and logistics and operational management major, said she knew that computers had a progressed over the years, but wasn’t clear exactly how much things changed.

“Seeing the parts here, knowing where it came from and how it has changed, puts it into prospective and makes it tangible,” she said.

Sauter said she’d like to see Grace’s Place continue to grow and expand. With plans underway for the construction of a new College of Business Administration building, she hopes the museum will find a new larger home in the building.

To donate pieces to Grace’s Place, contact Sauter at sauterv@umsl.edu.