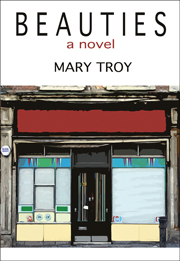 "Beauties" is a new novel by Mary Troy, director of the MFA in Creative Writing program at UMSL.

“Beauties” was still at the printer last week when the forthcoming novel’s author, Mary Troy, received a congratulatory note. It turns out the director of the Master of Fine Arts in Creative Writing at the University of Missouri–St. Louis wrote an award-winning book before it was even released.

“I opened my e-mail one morning last week and saw a note of congratulations from a friend and fellow writer from New York,” said Troy, an associate professor of English who lives in Ferguson, Mo. “That’s how I knew about the award. I’ve been smiling ever since.”

“Beauties,” a complex story set in south St. Louis, focuses on Shelly and Bev, two women who are diametrical physical opposites. Shelly, a mid-thirties divorcee, struggles to form relationships not predicated on her striking beauty. She moves in with her one-legged, unattractive and curmudgeonly cousin Bev to help run the foundering Alibi Café.

Troy alternates chapters between the points of view of Shelly and Beth. Throughout the book, the author chronicles the two characters’ struggles with each other and their surroundings.

The cousins and Alibi Café are not new, having first appeared in Troy’s earlier published short story “The Alibi Café.”

“I like these two women, Bev and Shelly,” Troy said. “Sometimes characters become part of you – and of course, they may be sides of you to begin with – and you do not stop thinking of them just because the story is finished.

“After writing and re-reading ‘The Alibi Café,’ I discovered I wanted to know if the café ever was a success and what the two cousins did to help it,” she continued. “I was also intrigued by Bev’s desire for motherhood, clearly a force in the short story. And Shelly’s beauty was so at odds with Bev’s physical appearance, I wanted to see what I could do with that.”

A drive through south St. Louis in the late 1990s and an old colleague and friend of Troy’s from her earlier days teaching high school English served as inspirations for the story. Her friend, who had one leg and was missing some fingers, helped Troy chaperone a group of 16 year olds on a trip to Mexico.

“I remember when we went through customs, the only suitcase that got checked was the one carrying her extra leg; she brought an old leg for swimming,” Troy recalled. “I was hooked on how she lived and survived the world.”

Years later, when driving through south St. Louis, Troy drove by a new diner. It was empty. A woman stood in the doorway, clearly looking for customers.

“It was a scene that filled me with loneliness,” she said. “I am not sure how the one-legged woman became connected with that scene, but she did.”

Troy has published dozens of short stories and essays, as well as three collections of short stories: “Joe Baker Is Dead,” “The Alibi Café and Other Stories” and “Cookie Lily.” She is the editor of Natural Bridge, a journal of contemporary literature published by the MFA in Creative Writing program at UMSL.

“Beauties” is due to be release this week in paperback by BkMk Press of the University of Missouri–Kansas City. The book costs $16.95 and is available for purchase at Left Bank Books in St. Louis, other St. Louis-area bookstores and http://www.amazon.com.