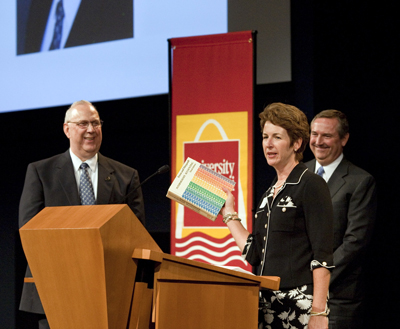 When St. Louis business leaders, such as Norm Eaker and Sandra Van Trease fondly remember their days in the College of Business Administration at the University of Missouri–St. Louis, they can’t help but remember one man – Dave Ganz. And they are not alone.

So announcing the Dave Ganz Classroom Initiative to a room filled with several hundred people, including Ganz, was an opportunity Eaker and Van Trease couldn’t refuse. The $1 million classroom initiative kicked off with an anonymous $100,000 gift and was announced during Ganz’s induction into the College of Business Administration’s newly created Accounting Hall of Fame last month at Edward Jones in Des Peres, Mo.

Eaker, principal and chief administrative officer at Edward Jones, and Van Trease, group president of BJC Healthcare, each earned BSBA degrees from UMSL, in 1977 and 1982 respectively. Like many other UMSL business graduates, they have passed through the classroom of Ganz, assistant professor emeritus of accounting and associate dean emeritus of the College of Business Administration, also known respectfully by many as “Mr. UMSL,” due to his more than 40 years of service to the university.

“The Dave Ganz Classroom Initiative is a well-deserved recognition of a man whose life’s work has been centered on educating the students of UMSL and the future leaders of our region,” Van Trease said. “No doubt he has directly and personally influenced the lives of over 6,000 people just by virtue of his time in the classroom. In addition to being a mentor, he is a friend. This initiative will help ensure that future generations of students have the benefit of knowing Dave Ganz.”

The classroom will be located in the proposed College of Business Administration Building. UMSL’s Gateway for Greatness Campaign seeks to raise $25 million in gifts and pledges for the college – $15 million to be used for the construction of the building and $10 million to fund endowed professorships and scholarships. To date, more than half of the goal has been raised.

Ganz began as an accounting instructor in 1966, during the university’s infancy. He, along with his colleagues, helped create and establish the department and college and turn them into the nationally accredited and recognized academic units they are today.

“The announcement of the Dave Ganz Classroom Initiative was a complete surprise. I’m very grateful, thankful and honored to be recognized in this fashion by UMSL and its wonderful alumni,” said Ganz of University City, Mo.

Ganz earned his bachelor’s and master’s degrees in accounting from Saint Louis University. Since joining the faculty at UMSL, he’s served as dean of student affairs, coordinator of the accounting program and associate dean and director of undergraduate studies in the College of Business Administration. After retiring in 2002, he stayed on part-time as alumni coordinator for the college.

To learn more about giving to the Dave Ganz Classroom Initiative, please contact Wendy Cornett, director of development, at 314-516-5921 or cornettw@umsl.edu.