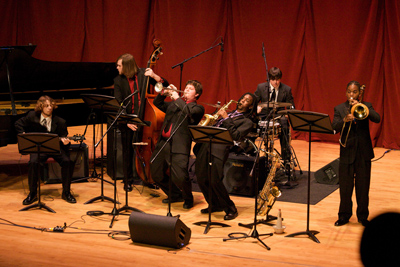 One of the UMSL Jazz Combos performs at a concert in the spring at the Touhill.

Five University of Missouri–St. Louis Jazz Combos will perform a mix of classics and original songs written by students from the groups. The concert will begin at 7:30 p.m. Nov. 18 in the E. Desmond and Mary Ann Lee Theater at the Blanche M. Touhill Performing Arts Center. It is free and open to the public.

The Jazz Combos are directed by Allen Beeson and Ken Kehner, lecturers in music at UMSL.

The Touhill is on UMSL’s North Campus, One University Blvd. in St. Louis County (63121). The concert is sponsored by the Department of Music at UMSL.