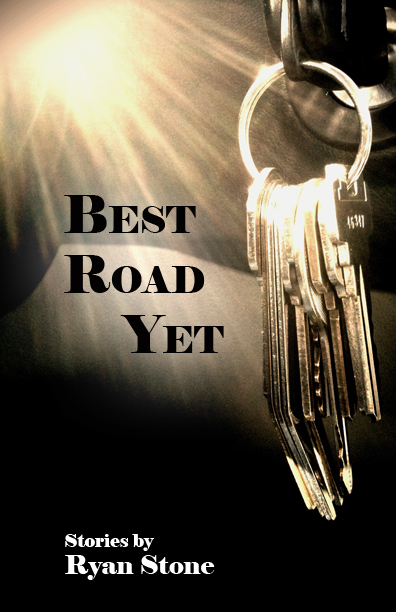 "Best Road Yet" is a collection of short stories written by UMSL alumnus Ryan Stone, MFA 2004.

University of Missouri–St. Louis alumnus Ryan Stone’s first fiction short story was published almost exactly 10 years ago. He’d only just begun to immerse himself in his writing when he realized his calling. “I enjoyed being a writer,” he recalled. “It fit like a tailored coat.” Now Stone (MFA 2004) is set to return to St. Louis as part of a reading tour for his first collection of short stories, “Best Road Yet.”

It was that first published work that helped lead him to the UMSL where he enrolled in the young Master of Fine Arts in Creative Writing program. Titled “Hotel Carnival,” the story appeared in the fourth issue of “Natural Bridge,” a journal of contemporary literature published by the MFA in Creative Writing program that served as Stone’s introduction to a degree he went on to attain.

“I think it’s still available on the ‘Natural Bridge’ Web site, if anyone wants to read my early sins,” Stone said of the story. Visit http://bit.ly/aF5SAg to read “Hotel Carnival.”

These days Stone keeps busy as editor for a new two-year digest and by teaching writing and literature at a community college in Danville, Ill. He also writes. A lot. In addition to “Best Road Yet,” Stone maintains a pair of blogs and his fiction has appeared in several literary journals, including “The South Carolina Review,” “The Madison Review” and “Whiskey Island Magazine.”

He’ll read from “Best Road Yet” at 7 p.m. Nov. 15 at Duff’s, 392 N. Euclid Ave. Stone will be joined by Mary Troy, director of the MFA in Creative Writing program, who taught Stone at UMSL. She’ll read from her new book, “Beauties.” General admission will cost $5 or $4 with a student ID.

UMSL News checked in with Stone to discuss “Best Road Yet” (published in September by Press 53) and his days as a graduate student at UMSL.

‘Best Road Yet’ is set in the fictional town of Wynott, Mo. What inspired your creation of Wynott?

Wynott is based, loosely, on my hometown of Licking, Mo. It’s a place where connections and bonds are very thick, so thick that they sometimes suffocate those involved. If anyone has ever lived in a rural area, they will probably recognize Wynott. One thing that does stick out is the negative, or dark, side of the small town atmosphere that I portray. It’s not to say that there aren’t positive things in rural areas. There certainly are, but I believe that the darker side of human nature is often suppressed in small towns. The “that-doesn’t-happen-here” attitude abounds, as if because you live in a small town, you are cloistered from danger and sin, even though those things live and breathe just beneath the surface of all of us.

Describe the kind of characters readers can expect to encounter in the stories of “Best Road Yet.”

This is a tough one because the characters represent so many different pieces of my world. But, I would say, if I were trying to generalize, that they are a group of displaced miscreants who are simply trying to better their situations. Overall, it’s not an extremely “likeable” group, but they are a relatable group, and, at least from my perspective, they resonate with a broader experience. Ultimately, the choices they make to move in a new direction are not always the best ones, sometimes they are, but the characters aren’t interested so much in what’s “best” for them; they are interested in the “best” path, even if that path is darker and more disturbing than the alternative. Really, the characters make the choices they make because they can’t see any other way around the obstacle, the reason for which grows out of who and where they are in their lives. I think this motif is exemplified in the cover art, which shows darkness with a light shining through it, illuminating a set of keys. We often think of the “light” as showing us the “right” way when really, the “light” is only showing us one way. So often that one way looks better than anything else at that moment. The darker path is sometimes brighter than the righteous path. It doesn’t always lead to some kind of salvation, but it certainly leads somewhere.

How has the book been received on the reading tour?

The response has been amazing so far. Every reading I’ve done has been full of people. Book sales have been better than I expected. So, I’m pleased. I will admit I’m a bit skeptical about the response in my hometown due to the fact that so much of the book is based around that culture. I know, however, that it will be what it will be.

How did your degree from UMSL help shape you into the writer you are today?

Most of who I am today as a writer was shaped by two things: my youth in rural Missouri and the guidance of the faculty and my classmates at UMSL. People always look at the faculty in an MFA program, and no doubt, the UMSL faculty is top-notch and represents excellence in poetry and fiction, but the students in the program are often overlooked. This is what makes the UMSL program so vibrant. It doesn’t discount the students for the sake of faculty achievement, something I see regularly throughout the writing community. The students are as much a part of that program as anyone else, and because of that, there are tremendous opportunities for growth, which is exactly what I needed as a young writer still honing my voice and my vision. I needed more guidance than out-and-out criticism, though I needed that as well, and UMSL provided a perfect balance of those needs.