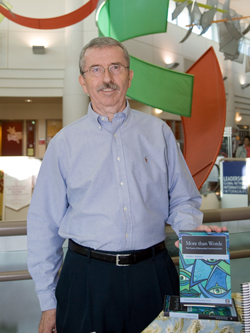 In spite of the old saying “never judge a book by its cover,” people form impressions of each other based on initial behavior. And while sometimes incorrect, first impressions are relatively accurate, according to Miles L. Patterson and his book “More than Words: The  Power of Nonverbal Communication.”

The professor of psychology at the University  of Missouri–St. Louis argues that nonverbal communication isn’t “body language.” Rather, it’s a critical system of communication that serves a variety of practical functions in our social worlds.

The book, published by Editorial Aresta in Barcelona, Spain, provides a broad overview of the importance of nonverbal communication and corrects some of the misconceptions about the topic.

During his four decades at UMSL, Patterson has written 90 publications, including three additional books, 20 chapters in edited scholarly volumes and more than 65 empirical, theoretical and methodological articles, most of them on nonverbal communication. He was also the editor of the Journal of Nonverbal Behavior and has served on the editorial boards of several other journals in psychology, communication and sociology. Patterson was the 1990 recipient of the UMSL Chancellor’s Award for Research and Creativity and the 2009 recipient of the University of Missouri System President’s Award for Research and Creativity.

His current empirical research focuses on automatic social judgments and on the subtle nonverbal interactions between pedestrians as they pass one another on the sidewalk. In the latter case, Patterson and his colleagues found very large differences in the ways that Americans and Japanese managed these brief interactions.

Patterson earned a bachelor’s degree in psychology from Loyola University in Chicago and master’s and doctoral degrees from Northwestern University in Evanston, Ill. He has been a faculty member in the Department of Psychology since 1969 and has served two terms as chairman of the department.

“More than Words: The Power of Nonverbal Communication” is available at the UMSL Bookstore and online at the following website: http://www.editorialaresta.com/. It should also be available soon on Amazon.com. Next year, editions in Spanish, Catalan, and Polish will also be published.