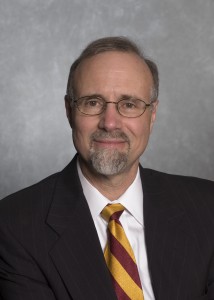 UMSL Chancellor Tom George has edited a book on nanoscience.

“Nanomaterials, i.e., materials with dimensions on the scale of a nanometer, play a prominent role in this current book,” George said. “This includes ultrafast processes stimulated by short laser pulses, such as in connection with fullerenes (any molecules composed entirely of carbon), and the exciting field of nanomedicine, such as selective laser cancer therapy using gold nanospheres and nanorods.”

In addition to nanomaterials, topics in the book include energy storage and optoelectronics, such as in connection with polymeric light-emitting diodes, semiconductor quantum wells, and tailored negative-index metamaterials and microdevices.

George has co-authored the introduction and 12 of the book’s 18 chapters. “Computational Studies of New Materials II” was co-authored by leading scientists from the United States and around the world.  The other co-editors, who also are contributing writers, are Daniel Jelski from the State University of New York at New Paltz, Renat Letfullin from Rose-Hulman Institute of Technology and Guoping Zhang from Indiana State University.

His research interests are in the theory of chemical physics and laser-materials interactions. He has written 725 papers, 5 authored textbooks and 16 edited books/volumes. He has received many honors and awards, including the Marlow Medal from the Royal Society of Chemistry (UK), election to the Korean Academy of Science and Technology, an honorary doctorate in physics from the University of Szeged in Hungary and most recently the 2010 Medal of Honor from Gulf University for Science & Technology in Kuwait.

George is an accomplished jazz pianist, playing frequently throughout the St. Louis region, and on occasion in other countries in connection with his travels associated with science and administration.