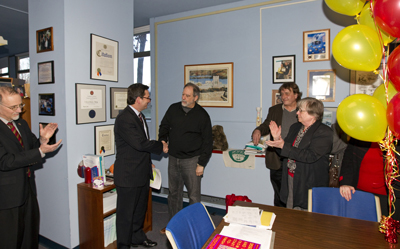 University of Missouri-St. Louis education scholar Marvin Berkowitz’s career has focused on building character and instilling respect and moral values in young people. That dedication and leadership has earned him the 2011 Thomas Jefferson Award. The University of Missouri System award is given to a faculty member whose excellence in teaching, research and community service best exemplifies the principles and ideals of President Thomas Jefferson.

Berkowitz, the Sanford N. McDonnell Endowed Professor of Education at the UMSL, founded the Center for Character and Citizenship in the College of Education at UMSL with Wolfgang Althof, the Teresa M. Fischer Endowed Professor of Citizenship Education, in 2006. Through the center, he offers the Leadership Academy for Character Education. LACE is a training program for administrators and educators to learn how to optimally foster the development of character in students while still supporting high quality academic instruction.

“This honor is so rewarding to me because I came to UMSL for the opportunity to apply my scholarly expertise to serving schools, and thereby supporting the positive development of our youth, and ultimately helping to build a more moral and democratic society (and world),” he said. “To be recognized for working to promote morality and democracy in the spirit of Thomas Jefferson’s life and spirit validates the purpose of my position, my career, and the opportunity that Sandy McDonnell afforded me by creating the position I hold at UMSL.”

Berkowitz will receive the award, which is only presented every other year, during a June ceremony in Columbia, Mo. He will hold the title of the Thomas Jefferson Professor for the next two years and will be a lifelong fellow.

UMSL Chancellor Tom George said Berkowitz is an amazing scholar and this award is well deserved.

“Marvin is an outstanding educator and a tremendous asset to his field, colleagues and students,” George said. “Having someone of his caliber, enriches our programs and enables our students to receive the very best training in character education. We are fortunate to have him as part of the UMSL family ”

In addition to running the leadership academy, Berkowitz has written more than 100 articles, book chapters and reports on character education and the leadership academy. His 2005 book, “Parenting for Good: Real World Advice for Parents from the Character Columns of Dr. Marvin W. Berkowitz,” is a collection of 50 newspaper columns written by Berkowitz over four years for the Topeka (Kansas) Capital-Journal. The enlightening and often humorous columns are filled with insight, advice and practical strategies about children and their character. He received the 2010 Good Work Award from the Association for Moral Education.