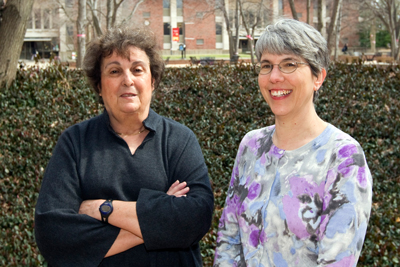 Without early information networks, university researchers would not have been as productive. That overall finding is one outcome from a series of studies completed by two University of Missouri–St. Louis professors and their colleagues as part of a $200,000 Mellon Foundation grant.

The pair, with two co-authors, wrote one of several papers from the grant, “The Impact of Information Technology on Academic Scientists’ Productivity and Collaboration Patterns,” in Management Science.

The study examined the effects of BITNET on productivity and collaboration for more than 3,000 life scientists from 314 U.S. institutions from 1969 to 1993. Prior to the Internet, BITNET linked computer mainframes of institutions.

“The availability of technology provided academics at universities with less or little resources to have those resources, therefore increasing their productivity,” Winkler said.

The study also showed that technology has helped improve the productivity of female scholars more so than their male counterparts. BITNET lead to a 12 percent increase in publications for women relative to men.

Winkler said information technology was an amazing asset to women in the academic field.

“[BITNET] allowed them the opportunity to share research, collaborate with colleagues throughout the U.S. and to publish more frequently,” she said. “Because of greater household responsibilities, women are more limited than their male counterparts in their ability to travel to research conferences where networking takes place.”

Levin said their findings did not surprise her.

“We’ve always suspected this, and we knew how [BITNET] had affected our personal careers, having the availability of technology and resources provided us opportunities we wouldn’t otherwise have had,” she said. “Technology has made it easier to participate.”

Through the grant, additional studies on technology and productivity will be published.