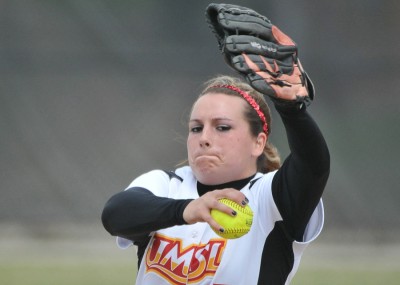 UMSL sophomore Leslie Davis was named GLVC Player of the Week for the week of March 19 and 20.

Davis guided the Tritons to a 4-0 record in conference play over the March 19-20 weekend as she batted .615 with an .846 slugging percentage and eight RBIs.

She opened that weekend by going 5-for-8 in UMSL’s doubleheader sweep at Kentucky Wesleyan College on March 19. In UMSL’s 17-2 win in the nightcap, Davis was 4-for-5 with four RBIs and two runs scored.

On March 20, UMSL topped the University of Southern Indiana in the first game 11-3 as Davis was 1-for-2 with two runs, an RBI and two walks. She also picked up the win in the circle, tossing the complete game, while striking out four.

She completed the weekend by going 2-for-3 with a home run, three RBIs and run scored in the Tritons’ 5-3 victory in the second game against the Screaming Eagles. Davis delivered a three-run home run in the fourth inning that turned a 2-0 deficit into a 3-2 advantage en route to the win.