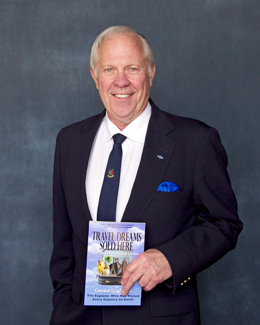 Graydon “Gig” Gwin has seen it all when it comes to traveling. Gwin, BA history 1971, has visited every country on Earth and is chairman and chief executive officer of Gwin’s Travel in Kirkwood, Mo. His first book, “Travel Dreams Sold Here: Crafting An Extraordinary Vacation,” was released April 1.

Upon graduating from the University of Missouri–St Louis 40 years ago, Gwin worked for a year at Trans World Airlines in New York and then nine years at Maritz, a sales and marketing services company, in Fenton, Mo.

“At Maritz, I was the product director for all parts of the world,” Gwin said. “It was my job to check out a new hotel, property or destination and then report back to the company. This information was used when salesmen or others from large corporations were awarded a trip through their incentive program. The trip was then set up through Maritz, and I had to make sure the destination would be a wonderful reward.”

After visiting 86 countries while working at Maritz, he decided to open his own travel company in 1979.

“The travel business is still going great — it’s booming,” Gwin said. “I now have three locations with a total of 40 employees and, last year, we booked 56,000 trips.”

The success of his company can easily be attributed to Gwin’s expert travel knowledge and advice. Additionally, he’s a national travel speaker and has written travel articles for one of American Express’ magazines for four years. He’s also part of the Travelers’ Century Club, whose members may join only after traveling to a minimum of 100 countries.

Gwin said he wrote the book because of his extensive amount of travel information and experience that simply needed to be put on paper.

“I’ve counseled people for so many years about numerous travel locations, and I finally decided to sit down and write a book,” he said. “I also noticed, over the past 40 years, that people often ask the same type of travel-related questions, so my goal was to provide a resource guide for everyone from the casual vacationer to the seasoned world traveler.”

Gwin covers many topics in his book including: why we travel, tourism through the ages, travel tips and pre-trip planning, grand tours, transportation, lodging, sightseeing, dining and more. Over 260 photos are featured throughout the book, and Gwin provides 33 travel-related lists, including his selection of the 75 grand tours of the world.