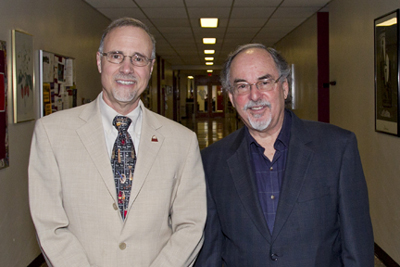 Conservative writer and policy advocate David Horowitz visited the University of Missouri–St. Louis last week. After being introduced by Chancellor Tom George, Horowitz explained he has spoken at more than 400 universities and this was the first chancellor introduction he had received.

“Also this is only the third time I have been invited to speak at a university by a faculty member,” Horowitz said of his invite by Dave Rose, professor and chair of the Department of Economics.

Horowitz presented his talk on “Political Idealism” to a full room Thursday in the Social Sciences & Business Building at UMSL. The discussion was sponsored by the F.A. Hayek Professorship of Economic History and the Department of Economics at UMSL.

“Usage of the word idealism implies wanting to make the world a better place,” Horowitz said. “However, idealism kills.”

He added that idealism is about intimidating people into actions and behaviors they might not otherwise pursue.

Horowitz said the academic freedom is about not imposing an agenda on students.

“It’s about teaching students how to think, teaching them how to assemble evidence,” he said. “Students have to be able to make up their own minds.”

Chancellor George said that UMSL has many guiding principles – none more important than civility and diversity. He added that intellectual diversity has helped shaped the development of this institution since its inception in 1963.

“That’s why I am so delighted that UMSL is hosting this important and timely discussion on political idealism – because it continues our practice of exposing our students and the larger community to varied viewpoints on important issues in a manner and setting that is conducive to civil debate and, therefore, constructive education.”

Raised in a liberal household, Horowitz began his career studying and writing from that vantage point. However, he soon underwent a political conversion and is today a leading conservative voice.

Horowitz is the founder of the David Horowitz Freedom Center, editor of FrontPage Magazine, and author of dozens of books and articles on political and social issues.