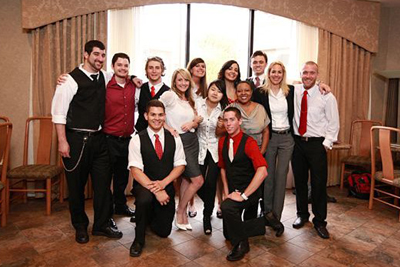 Kristy Tucciarone (second from right), assistant teaching professor of media studies at UMSL, is the recipient of the James S. Fish Aid to Advertising Education Award. Tucciarone's advertising students nominated her for the award, which is presented by the American Advertising Federation.

Kristy Tucciarone, assistant teaching professor of media studies at the University of Missouri–St. Louis, has helped several of her students receive recognition from the American Advertising Federation. Now her students have turned the spotlight on her.

Tucciarone was the recipient of the AAF’s James S. Fish Aid to Advertising Education Award. Her advertising students nominated her for the award, which is named after the senior vice president for corporate communications at General Mills. The award is given to an educator or professional for outstanding support of an AAF college chapter.

LaWanda Nunley graduated in May with a BS in media studies and a certificate in advertising. She initially wasn’t sure what degree she wanted to pursue until she met with Tucciarone, who passionately explained to her the various facets of the advertising field. Nunley knew then what she wanted to do.

Tucciarone’s enthusiasm has affected many students in this way, according to Nunley.

“(Tucciarone) is grooming some very smart, confident and productive students (who) will go out and change the world,” she wrote in a letting nominating her instructor for the AAF award.

Tucciarone received the award for all of the extras her students say she does for them. Her students regularly fare well in the local and regional advertising competitions such as the ADDYs and AAF National Student Advertising Competition.

She’s also had a student named to the AAF’s “Most Promising Minority Student” list for three consecutive years. The AAF only selects 50 students from throughout the U.S. each year. Tucciarone’s UMSL students were the only Missouri university representatives on the list the last two years.

Nunley was named a “Most Promising Minority Student” this year. This led to a New York City visit where she met with top advertising agencies and won the biggest scholarship awarded from the Neilson Company.

But Nunley said none of this would have been possible without Tucciarone’s encouragement and support.

“She goes above and beyond her duties as a professor,” Nunley said. “She really makes all her students feel special, which causes us to push beyond what we think we can do.”