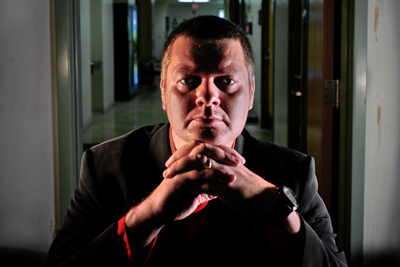 Bryan Spaeth, a former assembly line worker at Chrysler, received a BFA in studio art (with an emphasis in photography) Saturday from UMSL. His self portrait was taken for a studio portrait class in which he attempted to recreate photographer Arnold Newman's famous portrait of German industrialist Alfred Krupp. Visit bit.ly/mXDoz9 to view the full photo.

Bryan Spaeth put his formal photography education on a near two-decade hiatus beginning in 1991. In the interim – while digital unseated film for camera format dominance – Spaeth started a family and worked a well-paying job he didn’t like. Then his company laid him off.

Spaeth was among thousands to lose their jobs when Chrysler shuttered its plant in Fenton, Mo. But he wasn’t distraught over being newly unemployed. He was happy.

“I worked at Chrysler for 16 years and hated every minute of it,” Spaeth said. “But I had a family. Working on an assembly line is there because (the money) is too good to quit. You can’t walk away from it.”

At 38, he finally had a chance to return to school to fulfill his dream of earning a photography degree. On Saturday (Aug. 6), Spaeth, now 40, received a bachelor’s degree in studio art with an emphasis in photography from the University of Missouri–St. Louis.

Spaeth took a long road to his degree.

In 1989, he began taking classes at St. Louis Community College–Forest Park. Around his second semester, he took a photography class and fell in love.

“I always wanted to be an artist, but I can’t draw,” Spaeth said. “And I can’t paint, but I still understand composition and how colors work together. Photography allows me that end run around my lack of manual dexterity.”

He was, at the time, using a basic Minolta 35mm for the bulk of his shooting. In 1991, he planned to pack up his Minolta and move to Bronxville, N.Y., to attend nearby Sarah Lawrence College in Yonkers. Plans changed because money was tight.

“So I took a year off and that turned into about 19 years off,” Spaeth said.

Soon he was starting a family, putting his roots down in St. Louis and bringing home a decent paycheck while working on the assembly line at Chrysler.

For the seven years leading up to his layoff, Spaeth assembled brake lines to anti-lock braking system units and then mounted them to battery trays. His partner would take on the next step of actually installing the units into the truck.

“I tightened brakes lines for 350 trucks a day, anywhere between two to six brake lines depending on the kind of the ABS unit used,” Spaeth said. “It was as mindless work as you could imagine.”

He spent every free moment reading and had the radio playing constantly during his shift. With work being so mundane for Spaeth, he said this was the only way to stay sane. The job, he said, would drive you crazy, if you let it.

So when Spaeth was finally laid off in January 2009, he didn’t share in most of his co-workers’ sorrow. The layoff might have closed the door on a 16-year career at Chrysler. But it also reopened the door to one of Spaeth’s passions, photography.

With his buyout money from Chrysler budgeted, he set off to go back to school to finish what he started 20 years earlier. He was attracted to UMSL, in part, by the prospect of working with Dan Younger, a professor of art who specializes in photography and illustration.

Younger said Spaeth was one of those extraordinary students that UMSL seems to attract in abundance. He called his student talented, motivated and the type of person who seeks from his teachers and school the most he can get for the money he has invested in his education.

“I have a fondness for students who demand to be taught and are willing to work independently of their classes to make sure they get the most out of their UMSL experience,” Younger said. “Bryan is one of the best – and latest – examples of the best our department can offer to the profession.”

Spaeth worked on various photography projects at UMSL including a series on middle-age skateboarders he titled “Rejuvenile Delinquents.” But the bulk of his craft has been devoted to wildlife photography. It’s the polar opposite of working an automobile manufacturing assembly line where every minute is managed down to the second.

Spaeth said he’s learned a patience he never knew he had. There are no schedules with photographing wildlife. Getting the right shot can take hours. Sometimes hundreds of photos are taken before the one that’s just right.

“On the assembly line, if you waste 15 to 20 seconds tying your shoe, you are now in the hole. And you have to make up that time somewhere else because the trucks are going to keep rolling down the assembly line whether your shoe’s tied or not. The space of a minute is like forever,” Spaeth recalled. “Well, in wildlife, the space of hours is nothing at all.”

He now trades off between a Nikon D700 and Nikon D300 for his photography. Favorite wildlife subjects include the elk and bison of Lone Elk Park in west St. Louis County and herons in St. Louis’ Forest Park. UMSL’s Gallery FAB, Art Saint Louis and West Tennessee Regional Arts Center in Humboldt have displayed his work in exhibits.

Moving forward, he has a couple part-time jobs lined up including teaching photography on the weekends and managing the Fine Arts Building dark rooms at UMSL. He hopes to take on more work soon as the Chrysler money is starting to run out. Long term, he’d like to earn an MFA in photography.

Spaeth’s wife and kids have been supportive along the way to his new career. He hopes his children – an 18-year-old son and 16-year-old daughter – see him differently now. Spaeth said he felt before he set a bad example by showing his children that work was something you didn’t like, but did out of necessity.

“Now I’m trying to show them that if you think a little bit beforehand, you can actually do what you love and make money at it,” he said. “I make very little money now, but I’m just starting.”