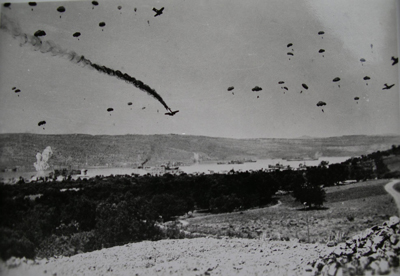 German paratroopers land on the Greek island of Crete in 1941 in an attempt to take over the island. The invasion was known as the Battle of Crete. (Photo via Wikipedia Commons)

On the morning of May 20, 1941, Germans launched an airborne invasion at the Greek island of Crete on the Mediterranean Sea. This airborne battle lasted 10 days and is considered by some as the turning point in World War II. Yet little attention is given to the battle.

Tony Kocolas, instructor of history at Merced (Calif.) College., will discuss “The Battle for Crete, 1941: Turning Point of World War II” at 7:30 p.m. Sept. 14 in Century Room C at the Millennium Student Center at the University of Missouri–St. Louis.

Kocolas will talk about the battle and how Greek forces, along with Cretan civilians, defended the island to keep access to Middle Eastern petroleum away from the Germans.

A parking permit is required for all visitors to UMSL. To request your free permit, a campus map and to make a reservation, see the contact information below.