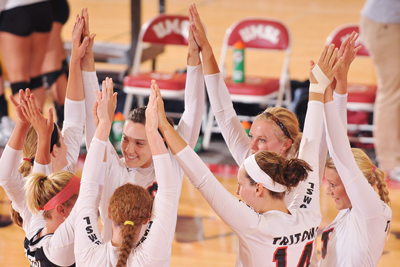 Players on the UMSL Tritons volleyball team huddle up before a match. The 2011 season is set to begin Labor Day Weekend.

Coming off its third straight 20-win season and a berth to the NCAA Regionals for the first time in 15 years, the University of Missouri–St. Louis volleyball team looks poised for another strong season with a handful of key contributors returning.

The UMSL Tritons will look to continue its recent dominance under the direction of first-year head coach Ryan Young. Although in his first season at the helm, Young is no stranger to the program having served as assistant coach last year.

Gaff was a first-team all-league selection at middle hitter last season after leading the team with 281 kills, 83 blocks and a .346 hitting percentage. Higgins, an opposite and outside attacker, earned second-team all-GLVC honors with 212 kills and 59 blocks, while Crawford, another opposite side attacker, was tabbed as a third-team all-GLVC selection after posting 244 kills and a .295 hitting percentage.

The Tritons also return sophomore Corinne Hoekstra to the net. She started 26 matches in her initial playing season and averaged 1.20 kills and 0.69 blocks per set.

The direction of the offense appears to be in good hands with the return of sophomore setter Anna McNulty, who led the squad with 650 assists (6.13 apg) and 29 service aces, while adding 1.39 digs per set in a 6-2 offense.

Other returning letterwinners include junior Liz Jaeger and sophomores Chelsea Burkle and Tabatha Albers. Burkle saw the most playing time of those three a year ago, averaging 1.18 kills, 0.69 blocks and 0.40 digs per set, but all three are expected to vie for significant playing time left void by outside hitters Liz Cook, a four-year standout who graduated and Kelsie Rankin, who will redshirt this season due to an injury after starting 28 matches and recording 2.43 kills per set in 2010.

Haseltine, Manis and Skaggs will all look to help bolster the back row, while Woods will look for time at the setter position.

Haseltine last played at the University of North Alabama in Florence from 2007-08 after a four-year career at Nerinx Hall in Webster Groves, Mo., where she was a four-time all-district and two-time first team all-conference honoree.

Manis comes to UMSL from John A. Logan Community College in Carterville, Ill., where she earned first team all-conference and All-Region 24 honors after averaging 5.5 digs per set and helping her team to two NJCAA Region 24 championships.

Skaggs was a four-time all-conference and all-region honoree at Washington (Mo.) High School and also earned honorable mention all-state honors as a senior after recording 296 kills, 322 digs and 42 service aces.

Woods averaged 4.6 assists, 2.3 digs and 1.8 assists per set last season at Illinois Central College in East Peoria, Ill., while helping her team to a sixth place finish at the national tournament.