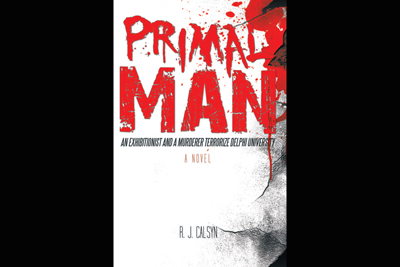 After spending more than 30 years working at a university, it’s not surprising that one might use the setting as the basis for a suspenseful, murder mystery novel. And that’s just what Robert Calsyn, professor emeritus of psychology and gerontology at the University of Missouri–St. Louis, did in his new book “Primal Man.”

“Primal Man” takes place in fictional Delphi, Mo. The small town south of St. Louis is known for its history of Greek mythology and Delphi University. A gender war at the university is raging between the radical feminists and the sociobiologists who have established the Program in Male Studies, referred to as PMS. A disciple of the former group has become an exhibitionist, coining himself as Primal Man. His attacks become more aggressive each time, until a female professor is found murdered. The suspect list includes her husband, a former student, two colleagues and Primal Man.

Calsyn, who has always been an avid fan of mysteries, said after retiring he decided to try his hand at a novel.

“As a former department chairman and faculty member, I’ve encountered many situations in which I wanted to strangle someone,” Calsyn said. “Writing a murder mystery seemed a more socially acceptable coping mechanism.”

Calsyn received his doctorate in psychology from Northwestern University in Evanston, Ill. After joining the faculty at UMSL, he helped to establish the Gerontology Program and served as the program’s director from 1983 until 2002. In addition, he’s served as advisor and chairman for the Department of Psychology.

He has more than 100 professional publications on the following topics: homelessness, social support, severe mental illness, case management, gerontology, and applied research methods. The federal government has awarded Calsyn and his colleagues nearly ten million dollars for their research evaluating the effectiveness of treatment programs for persons suffering from severe mental illness, substance abuse, HIV and homelessness. In 2001 Calsyn received the Chancellor’s award for Excellence in Research and Creativity.

“Primal Man” is available in paperback or as an e-book at Amazon.com and Barnes & Noble.