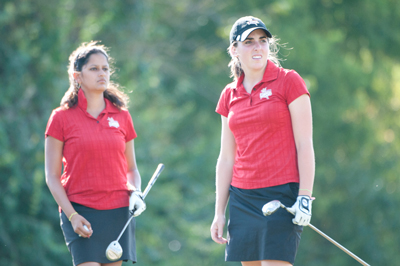 The University of Missouri–St. Louis women’s golf team enters the 2011-12 season with high expectations. The UMSL Tritons earned back-to-back trips to the NCAA Regionals the last two years and had their sights set on a third consecutive trip when the season began yesterday (Sept. 12) in Green Bay, Wis., at the Green Bay Phoenix Invite. (The Tritons got off to a rough start, sitting in 10th after first-round competition yesterday.)

Ninth-year head coach James Earle has a relatively young roster with just one senior listed, but the experience of the squad is plentiful as four of UMSL’s top five return.

Sophomore Daniela Viotti also returns after a standout freshman campaign in which she was named GLVC Player of the Year and Freshman of the Year. Viotti finished with a team-best scoring average of 78.4, posting eight top-five finishes, including three medalist honors.

Other returnees include senior Lindsay Kellerman and juniors Chelsea Kellogg and Samantha Pelc.

The lone newcomer is freshman Bailey Hopper from Overland Park, Kan. Hopper prepped at Bishop Miege in Roeland Park, Kan., where she was a four-time state qualifier, placing third as a junior, fourth as a sophomore and seventh as a senior.

UMSL will compete in five tournaments during the fall portion of its schedule, including its own UMSL Tritons Invitational held at Gateway Golf Links in Madison, Ill., Oct. 10-11.