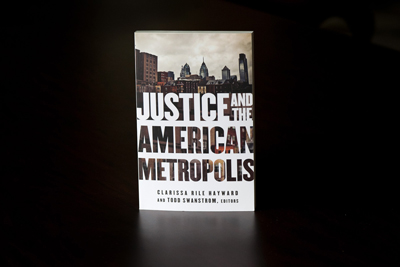 Todd Swanstrom, the E. Desmond Lee Endowed Professor of Community Collaboration and Public Policy Administration at UMSL, co-edited the book "Justice and the American Metropolis" out now from University of Minnesota Press.

University of Missouri–St. Louis political scientist Todd Swanstrom and his public policy peers want to push social justice back to the center of the urban policy debates. He is co-editor of the new book “Justice and the American Metropolis” that tackles the topic.

“Thick injustice is the idea that injustices in the modern metropolis – compared to earlier eras characterized by Jim Crow laws and powerful government actors – are now caused by more complex processes that make them both more opaque and more difficult to assign responsibility,” he explained.

The book editors and contributors sought to indentify these often invisible problems by addressing foundational questions about what justice requires in contemporary metropolitan regions. Essays focus on inequality within and among cities and suburbs; articulate principles for planning, redevelopment and urban political leadership; and analyze the connection between metropolitan justice and institutional design.

Swanstrom edited the book with Clarissa Rile Hayward, associate professor of political science at Washington University in St. Louis. The book’s contributors include a who’s who of urban policy experts and political theorists from throughout the U.S. and Canada.

“The contributors are truly some of the best-known and most-published scholars on urban politics in the nation,” Swanstrom said. “They come from many different disciplines, but they are all concerned with how justice can be brought to the fore in deliberations about urban and metropolitan policy.”

“Justice and the American Metropolis” is broken down into four sections that address the following topics:

The intended audience for the book includes scholars of urban politics from all disciplines, policymakers, others interested in urban policy and anyone interested in the intersection of justice and modern metropolitan life in the U.S., according to Swanstrom.

Visit bit.ly/qcw9Pq to hear a “St. Louis on the Air” interview with Swanstrom on St. Louis Public Radio | 90.7 FM.