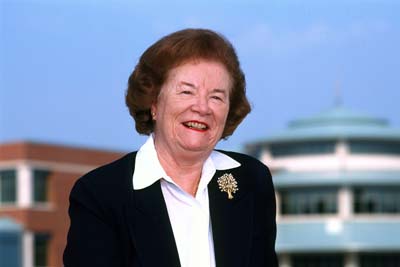 Blanche Touhill, historian and chancellor emeritus of UMSL, will receive an Outstanding Women of Missouri award in a ceremony from 2 to 4 p.m. Sept. 28 in the Century Rooms at the Millenium Student Center on UMSL's North Campus. A traveling exhibit that features outstanding women in Missouri's history will be on display in the Nosh at the MSC through Oct. 14.

Blanche M. Touhill, a historian and chancellor emeritus of the University of Missouri–St. Louis, has spent many years combing through historic archives. She will soon become the subject of a historical exhibit herself when she’s presented with an “Outstanding Women of Missouri” award in a ceremony from 2 to 4 p.m. Sept. 28 in the Century Rooms at the Millennium Student Center on UMSL’s North Campus.

The award will be presented to Touhill and Frankie Freeman, a prominent national civil rights attorney. Awards also will be presented posthumously to Dorothy Gaynor Blake, a musician and composer of the early 20th century; Jessie L. Gaynor, Dorothy’s mother and a children’s music composer; and Margaret Bush Wilson, an attorney and civil rights activist.

Outstanding Women of Missouri became a traveling history exhibit in 2002. It recognizes Missouri women “whose fortitude, persistence and judgment led them to distinguish themselves in their chosen profession or areas of service.” The exhibit, made up of photos and biographies of awardees, is available for loan at no charge through the Missouri Women’s Council. It will be on display on the ground floor of the MSC in the Nosh through Oct. 14.

Touhill came to UMSL in 1965 as an assistant professor of history and became a full professor in 1983. She worked her way up the administrative ladder starting in 1974 as associate dean of faculties. She was named interim chancellor in 1990 and appointed chancellor in April 1991. She retired in December 2002.

During her tenure as chancellor, UMSL added 30 academic programs, 32 endowed professors, 138 acres and several new buildings, including a $10 million student housing complex, a $32 million student center and a $52 million performing arts center that bears her name.