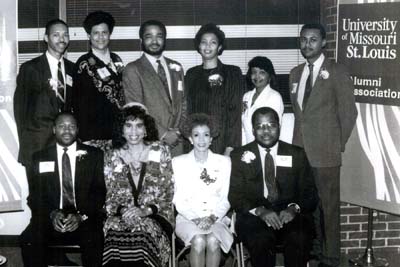 Twenty five years ago, a group of young alumni at the University of Missouri–St. Louis saw a need to connect with an increasing number of African American students.

“Back in 1986, my friend Anath Boone started talking about the need to have a chapter of the alumni association that focused on the needs of African American students and alumni,” said Rochelle DeClue, BS social work 1979, who started working at the university in 1981. “Helping students get through college and graduation was something we needed to do.”

At the beginning, DeClue, BS social work 1979; Boone, BA arts and sciences 1980; Bill Humphrey, BA education 1979 and Jon W. Thompson, BSBA 1976, were elected the first officers of a group called the “minority relations committee” of the Alumni Association. Within a few years, the group grew into an official alumni association chapter, the second to do so, right behind the College of Business Administration’s chapter.

“We worked hard to become a full fledged chapter,” DeClue said. “One of the first things we did was start the Next Step Mentoring Project in collaboration with Dr. Bridgette Jenkins, counseling psychologist in counseling services. We focused on junior and senior level students who were getting ready to go out into the world.”

The project provided a strong network of professionals who acted as role models, offered advice and entrée into various fields in St. Louis. Mentoring remains an important part of the chapter’s work, said DeClue. In those early days, the chapter also started raising money for students in need.

“We began with an annual dinner that funded a book stipend scholarship,” she said. “Then in the 1990s, Rex Carter, BSBA ’89, helped us raise enough money to endow a scholarship in the chapter’s name. We endowed, just recently, a second scholarship in Marguerite Ross Barnett’s name.”

Barnett, who served as UMSL’s chancellor from 1986-1990, was the first African American and the first woman to do so. The chapter continues to hold two major fundraisers a year to fund the scholarships.