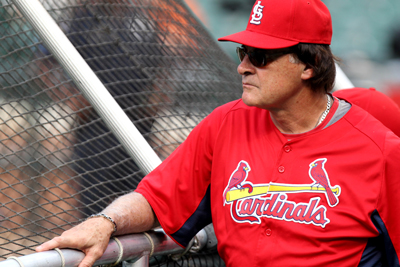 Tony La Russa watches his team taking batting practice before a game against the Baltimore Orioles June 28 at Oriole Park at Camden Yards in Baltimore. Photo by Keith Allison/keithallisonphoto.com

Three days after the St. Louis Cardinals completed an unprecedented two-month run to win an 11th World Series, Tony La Russa announced the end of one of the most successful managerial careers in Major League Baseball. In his 33 years as a manager, La Russa split his first 17 years between the Chicago White Sox and Oakland A’s before leading the Cardinals to two World Series titles, three National League pennants and nine playoff appearances over 16 years.

Chuck Korr, professor emeritus of history at the University of Missouri–St. Louis, wrote the book “The End of Baseball As We Knew It: The Players Union, 1960-81.” Korr, who as a longtime Philadelphia Phillies fan admitted to rooting against the Cardinals in the National League Division Series, recently weighed in on La Russa’s legacy in a Q&A with the St. Louis Beacon.

“I admire Tony,” Korr told the St. Louis Beacon. “I don’t know what he’s like as a person. I have met him three times in my life. But I have a feeling that I’d have liked to play for him.”