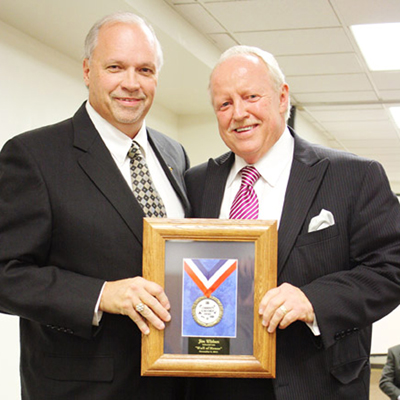 Because of his celebrated career in music and education, Jim Widner now has taken his place on the Lebanon (Mo.) Community Achievement Wall of Honor.

Widner is the director of jazz studies at the University of Missouri–St. Louis.

“To say that tonight is surreal is a huge understatement. I love my family, I love my career and I love my hometown,” Widner told The Lebanon Daily Record. “Being honored with this very prestigious group of people and those who have already been enshrined for eternity on the wall out here, it’s truly one of the most humbling experiences that I have ever had.”

The wall recognizes those who have made a contribution to the community. The first induction ceremony was held in 2001. Since then, 58 have received the award. Plaques with their pictures and stories hang on the wall in the Lebanon Civic Center.

A graduate of the University of Missouri–Columbia, Widner also holds a master’s degree from Memphis State University and has done postgraduate work at the University of North Texas in Denton. He has performed at the world famous Lionel Hampton and Montreaux Jazz Festivals. His performance background includes concert dates with Clark Terry, Buddy DeFranco, Mulgrew Miller, Louis Bellson, Randy Brecker, Bill Watrous, Marilyn Maye and an appearance before former President Bill Clinton. Widner also serves as guest conductor for numerous All-State Jazz Bands. In 1999, students at the University of Missouri–Columbia, renamed the music wing of the fine arts residential college “Widner House” in honor of him.

He maintains an ambitious clinic and festival schedule at high schools and colleges throughout the United States. This includes a series of summer jazz camps, spearheaded by members of the Jim Widner Big Band, which records with Chase Music Group. Their critically acclaimed CDs include “Yesterdays and Today,” “Body and Soul,” “Live,” and the band’s newest CD, “Flying High.”

More in faculty, School of Fine and Performing Arts