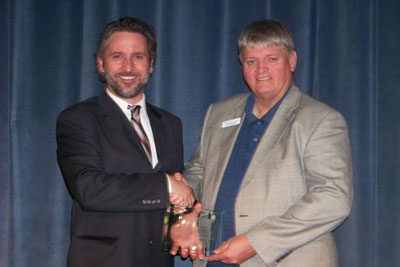 Scott Perkins, project director of the Missouri Suicide Prevention Project, received the National Alliance on Mental Illness of Southwest Missouri’s Excellence in Government Award. The award is given to an individual who has contributed to the positive advancement of the mentally ill through support of legislation efforts, by developing new programs or improving access to treatment.

“I was surprised and very honored to win the award from NAMI,” said Perkins, of Columbia, Mo. “NAMI is a national leader in the field of mental health, and the Springfield affiliate has been a champion of suicide prevention efforts in Southwest Missouri for many years.”

The Missouri Suicide Prevention Project has trained more than 50,000 people to serve as “gatekeepers” in their communities and help recognize persons at risk of suicide and refer them to help. The project also has funded more than 100 local projects around the state, including many in the St. Louis area. In addition to hosting an annual conference for the past six years, MSPP also co-sponsors many local events and activities, including workshops, awareness walks and support groups.