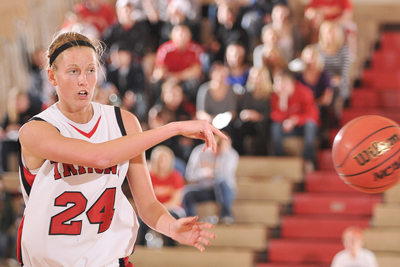 MEN’S BASKETBALL
UMSL split a pair of games at the John Worth Insurance/Hampton Inn Owensboro Classic last weekend, hosted by Kentucky Wesleyan College (Owensboro). The Tritons suffered a 75-60 loss to Bloomfield (N.J.) College before bouncing back to post an80-61 victory over Clark Atlanta University. Senior Troy Long was named to the all-tournament team after averaging 19.0 points in the two games and connecting on 9-of-14 three-pointers. The Tritons now stand at 2-3 on the season.

WOMEN’S BASKETBALL
The UMSL women’s basketball team defeated Christian Brothers University (Memphis), 55-37, at home last weekend in its lone game of the week. It was the third straight win for the Tritons, who improve to 3-1. Junior Devonna Smith led UMSL with 14 points, 12 rebounds and two blocked shots, while senior Caitlyn Moody also finished with 14 points and snagged seven rebounds.