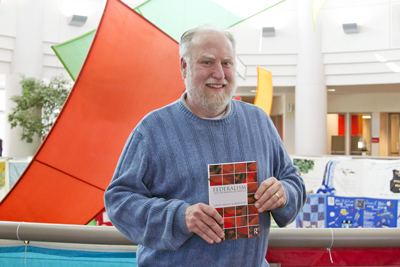 Dave Robertson, Curators' Teaching Professor of Political Science at UMSL and author of "Federalism and the Making of America," was one of several faculty members to participate yesterday in the Faculty Author Reception at the Millennium Student Center.

Robert Bliss had a problem. He had already spent his allotted funds for the semester on an economics book. But for this historian, a book titled “Federalism and the Making of America” was a serious temptation.

Bliss, dean of the Pierre Laclede Honors College at the University of Missouri–St. Louis, was contemplating dozens of books at the Faculty Authors Reception Dec. 1. Held to showcase UMSL faculty and their research, the reception attracted a steady stream of faculty, students and staff who chatted with the authors about their research. This is the third year for the faculty authors’ reception.

“The Department of English had six books this year,” said Ronald Yasbin, dean of the College of Arts and Sciences and obviously proud of the authors. “Sometimes the rest of the university just doesn’t realize how good our faculty are. This is a great way to showcase them.”

Six of the authors were credited with two books and publications from 40 UMSL faculty members, including a DVD of the film “Pennies for the Boatman,” directed by Niyi Coker, the E. Desmond Lee Endowed Professor of African/African American Studies.

Miles Patterson, professor of psychology, had Spanish, Catalan and Polish language versions of his book, “More Than Words,” on the power of non-verbal communication. A Japanese version is due out soon.

Vicki Sauter, professor of management information systems, penned the book, “Decision Support Systems for Business Intelligence.” DSS, she explained, is an interactive computer system aimed at decision makers in a business or organization to help strengthen the choice process.

David Robertson, Curators’ Teaching Professor of Political Science and author of the book on federalism, dedicated it to his students. He used the draft of the book to teach a course in the honors college last year.

Still referring to the federalism book as a “treat,” the honors college dean left the reception with a solution. He would order it to help tailor a new American history course next fall.