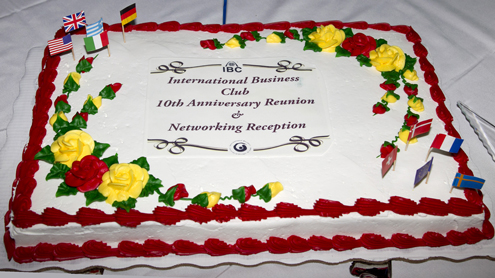 More than 65 people gathered last week in the Century Rooms at the Millennium Student Center at the University of Missouri–St. Louis to celebrate the 10-year anniversary of the creation of the International Business Club.

UMSL alumna Jennie Shane remembers the Fall semester of 2001 as one of great confusion and excitement. Shane, BSBA 2003, said after the terrorist attacks of Sept. 11, students in the College of Business Administration at UMSL were like many people around the world – worried and uncertain about the future.

“There was a fear among all students, but even more for the international students,” said Shane, who now works as a manager for Hackett Security in St. Louis. “At that time we were just looking for a way to come together, to get to know each other and to learn from each other.”

Sheena Crompton, a senior business major and vice president of the international business club, organized the event which included a meet and greet, refreshments and several speakers.

“The IBC anniversary reunion was a huge success,” Crompton said. “It provided the perfect opportunity for us to reconnect with our alumni and network with professionals.

She hopes that many of the alumni who came back will stay active and interested in the club. Crompton said there are many opportunities through the club’s Speaker Series or through a new mentoring and networking program that will soon be established.

“My hope is that by staying in closer contact with our alumni, they will see our enthusiasm and return to campus more often to help IBC members develop international business skills and uncover new opportunities,” she said.

Betty Vining, assistant teaching professor of marketing at UMSL, is the current and founding adviser to the club.

“The International Business Club began after 9/11 as a way to bring our diverse student body together,” Vining said. “This club has been an integral part of our International Business Program, which has ranked among the top 20 programs in the country for the past nine years. In reaching out to my former students to invite them to the event, I received messages from Indonesia, Germany, Brazil, Canada and many other countries from students sending their regrets that they couldn’t come because they were working too far away. I can take that kind of rejection! It only tells me how successful we have been.”