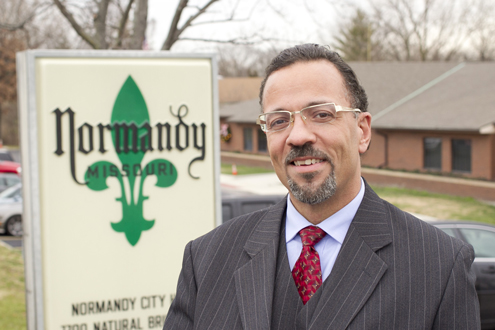 Patrick Green, mayor of Normandy, Mo., has worked together with the University of Missouri–St. Louis on a number of community improvement projects. For his efforts, he was recognized with the Presidential Citation Award for Outstanding Service to UMSL on Nov. 30 at the Alliance Awards Dinner in Columbia, Mo.

“We applaud Mayor Green for his most successful efforts to collaborate with the university for the betterment of north St. Louis County, including his work to push forward the redesign of Natural Bridge Road near campus,” George said.

Green has played an integral role in the development of the Great Streets Project for Natural Bridge Road, which provides multiple accesses to the UMSL campus. After lying dormant for seven years, Green teamed with the university to breathe new life into the project.

They were also able to develop new housing concepts for UMSL students and city residents along with economic development to accompany the changes to the Natural Bridge corridor.

Green has also worked with the university to develop volunteer projects for students throughout the Normandy area.

Both Green and his wife, Angela, are members of the UMSL Students of Service Community Advisory Board that has helped engage students in projects such as researching Normandy’s history, rehabbing foreclosed homes in the local area, creating a Normandy Area Resource Guide and mentoring youth.

The alliance is composed of representatives from each campus and University of Missouri Extension. The alliance serves as a supportive and unified voice for the UM System in legislative advocacy, and facilitates the interchange of ideas and information between the UM System and the campus alumni associations and extension.

The four-campus University of Missouri System is one of the nation’s largest public research university systems with more than 75,000 students and nearly a half million alumni worldwide.